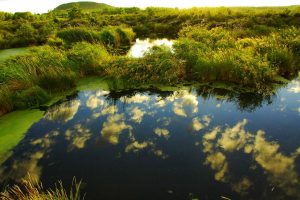 Imagine, hundreds of years ago, hearing a thunderous crack rend the air and watching in horror as ash plumed into the sky, blocking out the sun. This was the terrifying reality for the people of Wudalianchi County in Heilongjiang province when, from 1719 to 1721, a sequence of volcanic eruptions sent shockwaves throughout this otherwise peaceful region. As lava rushed up to the surface and snaked its way across the land, it formed two large volcanoes: Mount Laohei and Mount Huoshao. In the process, hardened lava blocked a section of the nearby Amur River, forming a series of five interconnected lakes. 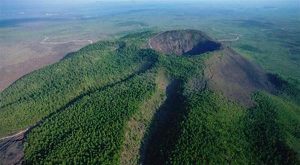 The beauty of these lakes, coupled with the fourteen volcanoes and countless volcanic landforms nearby, meant it was designated by UNESCO as a Global Geopark in 2004. In fact, this scenic area is so integral to the region that its name and the county’s name of “Wudalianchi” literally translates to mean the “Five Conjoined Pools”. While most natural disasters leave behind a trail of destruction and devastation, these volcanic eruptions ended up producing one of the finest natural attractions in China!

The five great lakes, known as Lotus Lake, Yan Mountain Lake, White Dragon Lake, Crane Chirping Lake, and Ruyi Lake, have names equally matching their grandeur. Among them are littered frozen lava cascades, surreal lava stalactites, eerie lava passages, belching fumaroles[1], strangely shaped lapilli[2], and smooth volcanic bombs[3]. These bizarre formations were all produced over millions of years as a result of volcanic activity. After all, with fourteen volcanoes in the vicinity, things are bound to get a little heated! Mount Laohei remains the most popular of the volcanoes and, at a staggering 516 metres (1693 ft.) in height, is also the largest. Evidently sometimes size does matter!

With its shimmering lakes, towering volcanoes, and bizarre lava formations, you’d think Wudalianchi Global Geopark would be a haven for geologists and hikers. Yet many of its visitors are after more than just a glimpse at its natural beauty. According to local legend, over one hundred years ago a young herder from the Daur ethnic minority named Galasangbaiyin lived near Wudalianchi. As with all good folktales, he fell madly in love with a slave girl called Aqimeige. However, when the herd owner discovered their secret affair, he thrashed Galasangbaiyin and locked him in the stables. In a fit of desperation, Aqimeige stole a horse, placed her unconscious lover on its back, and attempted to make her escape.

As she rode away, the herd owner shot her with a poisoned arrow and she fell from the horse, dragging Galasangbaiyin with her. Together they both plunged into a nearby spring and found, to their surprise, that the cool water miraculously cured their wounds. To mark this unbelievable event, Galasangbaiyin inscribed the words “medical spring” on the rock beside it, and Daur herders would swarm to it to take advantage of its healing powers. No one knows exactly which spring is the fabled “medical spring”, but nowadays South Spring, North Spring, South Washing Spring, and Bubbling Spring are all celebrated for their supposed healing properties. Thousands of tourists flock here every year in order to drink or bathe in their waters, hoping to cure whatever ails them.

After some physical healing, you may be in the mood for some spiritual healing. Believe it or not, this volcanic territory, rich with fire and brimstone, is home to a Buddhist temple! If being surrounded by volcanoes wasn’t unique enough, Zhongling Temple is actually nestled deep within Mount Yaoquan’s once fiery volcanic crater. So prepare to get lost on a scenic ride through the lava fields, feel revitalised in the healing springs, or discover more about volcanic landforms at the Wudalianchi Global Geopark Museum. This natural wonderland is simply erupting with tempting possibilities!

[1] Fumarole: An opening in or near a volcano through which hot sulphurous gases emerge.

[2] Lapilli: Lapilli are rock fragments that have been ejected from a volcano during an eruption.

[3] Volcanic bomb: A volcanic bomb is a mass of molten rock that is ejected from a volcanic during an eruption and cools into a solid fragment before it hits the ground. They are typically over 64 millimetres (2.5 in) in diameter.