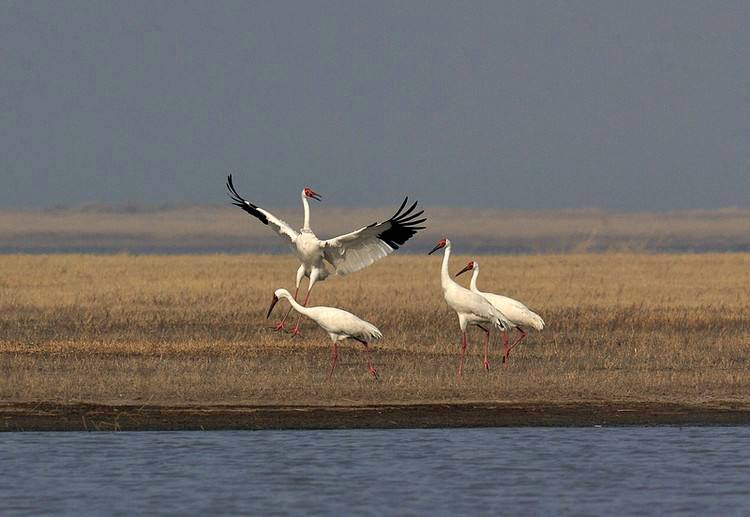 Fed by the rippling Gan River that cuts through Jiangxi province, Lake Poyang is the largest freshwater lake in China. Or at least most of the time it is! In fact, the “lake” is actually a system of lakes and swamps that are subject to change throughout the seasons, fluctuating in size dramatically depending on the weather conditions. In winter, the entire area transforms into a dense marsh, crisscrossed with waterways and speckled with verdant hills. In summer, when the region floods due to heavy rain, these hills become islands and the lake swells to its full grandeur.

Tragically, its size has drastically decreased in recent years due to drought and the construction of the Three Gorges Dam. To put it into perspective, the provincial capital of Nanchang once rested on the shores of the lake, but is now 24 kilometres (15 mi) away from it! In spite of this unfortunate change, the lake remains an important habitat for migratory birds and over half a million birds take refuge on its shores every year.

During winter, it becomes home to over 90% of the planet’s Siberian crane population. The Siberian crane is one of the most critically endangered species in the world, with their population dwindling to approximately 3,000 individuals. Since they mate for life and typically live for upwards of 30 years, they have become symbols of longevity and prosperity in Chinese culture. With their pure white feathers and elegant long legs, it’s unsurprising that these delicate creatures draw crowds of bird-watchers to Lake Poyang every year. 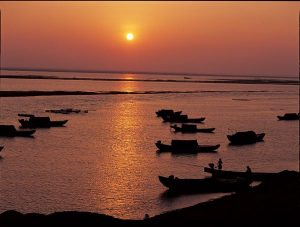 Researchers have surmised that the lake was formed sometime around the year 400, when the Yangtze River switched to a more southerly course, causing the Gan River to back up and form Lake Poyang. Tragically this triggered mass flooding in Poyang County and Haihun County, forcing innumerable people to abandon their homes and relocate to Wucheng Township (modern-day Yongxiu County). However, as the old saying goes, every cloud has a silver lining! Thanks to this sudden influx of people, Wucheng grew to become one of the wealthiest and most prominent townships in Jiangxi province, which spawned the local phrase: “Drowning Haihun County gives rise to Wucheng Township”.

Yet this isn’t the lake’s only historical claim to fame. It was also the site of the epic Battle of Lake Poyang, which represented one of the greatest naval battles in Chinese history. On the fall of the Yuan Dynasty (1271-1368), numerous rebel groups sought to seize control of the throne, the most powerful of which were the Ming, the Han, and the Wu. In 1363, the Han leader Chen Youliang besieged the city of Nanchang with his formidable navy of tower ships.

In response, the Ming leader Zhu Yuanzhang sent his naval forces, which were smaller but also more nimble. After six harrowing days of fighting on the lake, the Ming achieved a glorious victory, which all but cemented their position as the leading rebel group. Five years later, Zhu finally took power and established the Ming Dynasty (1368-1644) under the title the Hongwu Emperor.

Alongside these historical events, legends abound regarding the lake and its many scenic spots. One such legend recounts why Dagu Hill, a small island nestled in the lake’s clear blue waters, resembles a giant shoe. Many years ago, it’s said that a young fisherman named Hu Qing lived on the hill. One day, he was fishing on the lake when he came across a box containing a beautiful pearl. On his way home that day, he saw a young girl dressed in green, who was softly weeping. He asked her what was wrong, and she told him that she had lost her precious pearl. Without a second thought, he returned the pearl to her and went on his way. 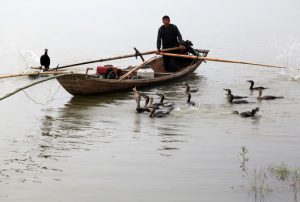 The next day, Hu was once again fishing on the lake when a huge storm eclipsed the shore. He knew he was in grave danger. As he fought the storm, he suddenly saw a maiden dressed in green holding a glowing pearl. Using the light of the pearl, he was able to navigate his way safely back to shore. The girl explained that she was actually a fairy named Da Gu, but she had been exiled to earth because she had violated the holy rules of heaven. As with all good fairy-tales, Hu and Da Gu fell madly in love and got married. However, it seems happily ever after wasn’t in the cards for them!

The Jade Emperor learned that Da Gu had married a mortal man and sent his army to capture her. Meanwhile, a vicious overlord named Sheng Tai had become captivated by Da Gu’s beauty and wanted to make her his own. As the Jade Emperor’s army captured Da Gu and began carrying her back to heaven, she looked down and saw her husband being tortured by Sheng and his cronies. In a desperate attempt to save him, she slipped off one of her shoes. As it fell to earth, it transformed into a huge piece of rock, crushing Sheng’s men and saving Hu. This rock supposedly forms the shoe-like cliff that makes Dagu Hill so unique!

Nowadays, the hill is a popular tourist spot, offering panoramic views of the glistening lake and boasting the magnificent Heaven Flower Palace. That being said, the mystical forces at play on Lake Poyang aren’t always quite so benevolent! Known as China’s “Bermuda Triangle”, the waters surrounding Laoye Temple on the lake’s northern shore are notorious as a place of supernatural activity. On April 16th 1945, a Japanese troop ship and its 20 sailors vanished without a trace while sailing on the lake. Over a period of 30 years, more than 200 boats have mysteriously sunk in these waters, never to be seen again. So, if you’re taking a trip to the temple, be sure to stay on the shore!