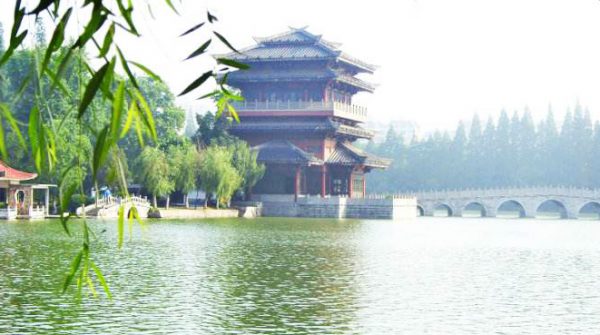 As the provincial capital, Hefei is the historical, cultural, and political centre of Anhui province. With a growing population of approximately 7.6 million people, you’d expect this prefecture-level city to be an urban jungle of concrete high-rises and tarmacked roads, yet its scenic surroundings add a natural flair to this otherwise man-made affair. The Huai River flows to the north and the Yangtze is to the south, while the magnificent Chao Lake, one of China’s great lakes, is just to its southeast. The shimmering waters, dense forests, and colourful meadows that surround the city all endow it with an inimitable charm. Yet this peaceful place once played host to a battle so infamous that it has become practically legendary.

In the 3rd century, during the Three Kingdoms Period (220-280), one of the most significant conflicts of China’s history took place; the Battle of Xiaoyao Ford. This was the culmination of several decades of warfare between the Kingdoms of Wu and Wei and was waged at Xiaoyao Ford in Hefei. General Zhang Liao of Wei led the attack, a skilled cavalry of 800 men, while the Kingdom of Wei boasted an army of over 200,000 soldiers.

Yet miraculously General Zhang Liao and his minute force defeated the Wei army. So the next time you’re in a competition and you’re facing unwinnable odds, just think of General Zhang. Even if you’re just buying your lottery ticket! The site has since been converted into a public park, where visitors can ironically relax in a place where such a heated battle once raged.

Throughout the 4th and 6th century, the area represented a crucial border region between the northern and southern states and so was much fought over. As a result, its name and administrative status frequently changed. The current city dates back to the Song Dynasty (960-1279), as the original city rests a little to the north, and it is sometimes referred to as Luzhou, since this was its name throughout the Ming (1368-1644) and Qing (1644-1912) dynasties.

By far its most popular and prestigious attraction is the Memorial Temple of Lord Bao, which rests in Lord Bao Park. Imagine how important you have to be in order to get your own park and your own temple! In fact, Lord Bao was such a focal figure in Chinese history that there’s even a second memorial temple dedicated to him in Kaifeng, Henan province.

Lord Bao, also known as Bao Zheng or Bao Gong, was a government official during the Song Dynasty who was born in Hefei and who rose to prominence thanks to his honesty and righteousness. He became well-known for punishing even the most powerful families and showing no nepotism when it came to dispensing justice. The temple itself was built in 1066 but went through extensive reconstruction during the Qing Dynasty.

Aside from this, the city has many other charming parks, including Xiaoyaojin Park, Xinghua Park, and Yaohai Park, as well as the lovely Hefei Botanical Gardens. In the southern part of Xiaoyaojin Park, the ancient Mingjiao Temple stands as a testament to the many battles that Hefei has endured. Although it has been destroyed and restored many times, it has managed to remain a focal feature of the city for nearly 1,500 years.

Mount Dashu is another popular sight-seeing spot where, after only a short 30 minute hike, visitors are rewarded with a panoramic view of the city. At the foot of this mountain, the delightful Kai Fu Buddhist Temple is a haven where visitors can relax and admire its elaborate architecture.

However, to truly understand Hefei as a cultural centre, you must see a local performance of Lu Opera. This type of opera originated from the area and emerged as an independent style during the Qing Dynasty. It is often described by fans as natural and simple yet rich and vivid in its range. Either way, it’s bound to be better than the Spice Girls!

After a long evening of wandering through parks and watching Lu Opera, most locals wind down by indulging in a plate of Luzhou Roast Duck or a bowl of crayfish; two of the tantalising delicacies that can be found in this city. During summer, people from all walks of life can be seen sat outside, drinking beer and dipping freshly boiled crayfish in a tart vinegary sauce. You’d be cray-zy not to join in!