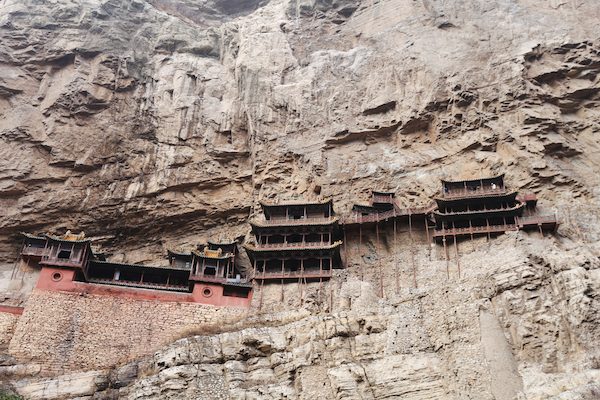 The Hanging Temple is one of few places in the world that matches up to its unusual name, as it truly is the stuff of legends. Also known as Xuankong Monastery, this teetering temple has been literally embedded into the side of Mount Heng and hangs precariously from the cliff-face. Yet, in spite of its perilous appearance, the temple has stood firm for over 1,500 years. Not only is its placement unique, it is also one of the only temples in the world that is dedicated to more than one religion, combining teachings of Buddhism, Taoism, and Confucianism. After all, when you’re literally hanging from the side of a cliff, you probably need the help of more than just one god!

The temple complex itself is about 65 kilometres (40 mi) from Datong City and hangs a staggering 75 metres (264 ft.) above the ground. It’s so high up that you could fit Buckingham Palace under it three times with room to spare! This architectural feat was achieved by chiselling holes into the cliff and then fitting large, load-bearing oak beams into the holes. The stilts below the temple are actually just for show and are there to make visitors feel more comfortable about its stability, as the beams wedged into the rock-face have safely held the structure up for centuries. Since it is located beneath a prominent outcropping in the rock, the temple is sheltered from sunlight and erosion, which is why it has remained in such spectacular condition. I doubt I’d look as good at 1,500! 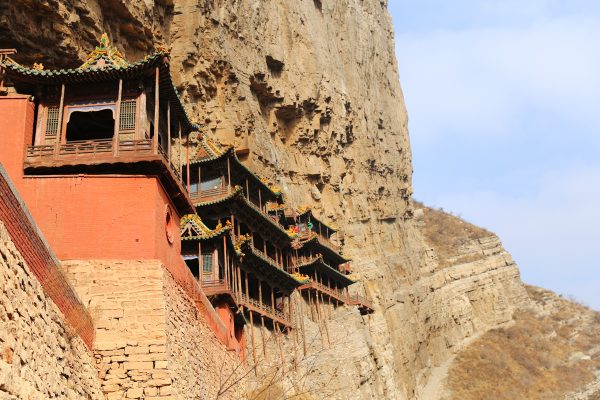 No one knows precisely who built the temple or who organised its construction, but many historians believe it was likely to have been masterminded by the King of the Northern Wei Dynasty (386-534 AD). However, according to one local legend, the original temple was built by a single monk named Liao Ran. Either he must have been very tall or very brave! The temple has undergone several rebuilds and restorations throughout the Ming (1368-1644) and Qing (1644-1912) dynasties to achieve its current glory. The temple complex itself is made up of 40 halls containing around 80 sculptures of copper, iron, terracotta, and stone. A stone staircase chiselled deep into the rock allows access to the temple, while the 6 main halls are connected by staircases, walkways, and boardwalks that provide a dizzying view of the drop below. Just don’t look down! 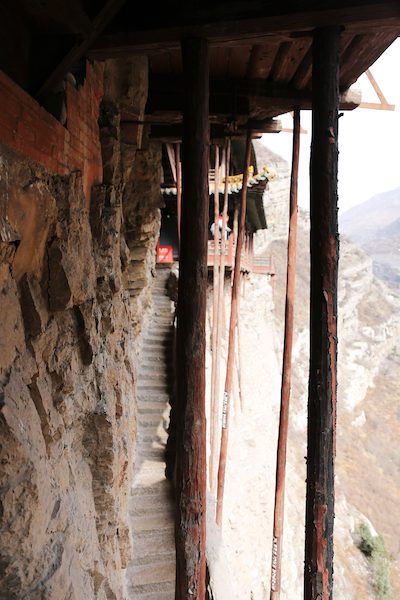 After entering the temple gate, you will arrive at the main building, which is made up of three floors. The upper floor hosts the Three Buddha Hall, the Taiyi Hall, the Guandi Hall, and four side rooms with intricate statues of Bodhisattvas. Behind the main building, there are two “flying buildings”, which are so-called because the top floors are connected to the main building by a narrow wooden walkway and the bottom floors are linked by a narrow path that has been dug into the cliff-face. From the bottom to the top, the southern building contains the Chunyang Hall, the Sanguan Hall, and the Leiyin Hall. The northern building consists of the Four Buddha Hall, the Sansheng Hall, and the Sanjiao Hall respectively.

The Sanjiao Hall is of particular interest, as inside this hall you’ll find statues of Confucius, Lao Tzu, and Sakyamuni Buddha all sat side-by-side, representing the respective religions of Confucianism, Taoism, and Buddhism. With their watchful eyes and serene faces, they remind us all that, no matter our differences, we should all try to get along.

Yet the wealth of information about this temple tends to leave researchers with more questions than answers, such as; why build it like this? And why dedicate it to not one religion, but three? Its strange appearance seems to be less for sacred reasons and more for practicality. The temple is so high up that it’s shielded from floods, while the rock-face above it protects it from heavy rainfall, snow, and long-term damage from sunlight. According to the principles of Taoism, all temples should be built far away from earthly noises, such as roosters crowing or dogs baying. This may also explain why it was built so far up, as I doubt any roosters are going to try flying that high! 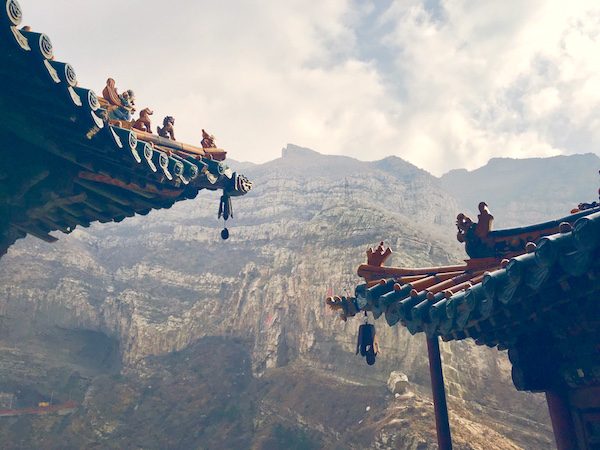 The prevalence of religion in ancient China meant that travellers were reluctant to stay in temples that worshipped religions different from their own. Some theories about why the Hanging Temple enshrined three of China’s major religions was to encourage travellers of all kinds to stay there, as its remote location meant that any weary traveller who passed up the opportunity might not make it to the next safe haven. After all, we may have different religious beliefs, but we all get hungry and tired after a long trip!

[1] It is important to note that Confucianism is not widely regarded as a religion, but is instead considered a school of thought

2 Replies to “The Hanging Temple”