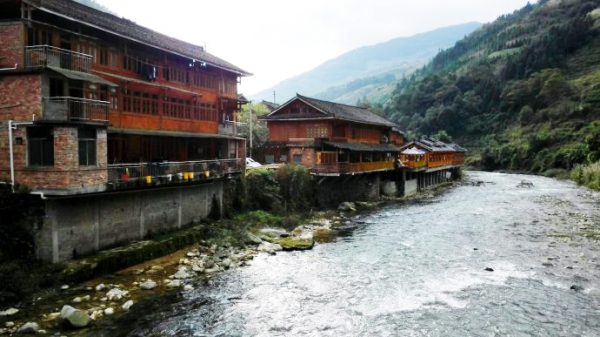 Huangluo Red Yao Village is part of the Longji Rice Terraces Scenic Area but amazingly this is not its focal attraction. Huangluo is located just 1 kilometre south of Ping’an village and over 87 kilometres (54 miles) from Guilin city. It is famous throughout China not for its magnificent rice terraces, but for its locals. Huangluo is home to the Red Yao people, a branch of the Yao ethnic minority that are so-called for the vibrant red jackets and shirts that the women wear on festival occasions. The village itself is relatively ordinary, with a population of just over 400 people living in 60 households throughout the village. However, what makes this village so extraordinary is a strange habit kept up by the local Yao women, which has earned Huangluo the title of “World’s First Long Hair Village”.

The village holds the Guinness World Record for the largest group of people with the longest hair. Over 60 girls in the village have silken black hair over one metre in length, and a handful of them have hair over 2 metres long. Their hair is not only incredibly long, it is in exceedingly good condition and this is all thanks to a beauty regime that the Yao women have practised for years. Normally they will wash their hair in the river every day but every third or fourth day they will wash their hair using a special “shampoo”. This “shampoo” is made by first fermenting water that has been used to wash rice. This water is fermented for at least a week until it starts to smell a little sour. The rice water is then boiled and pomelo skins are added to the mixture. Finally, the residue left over from crushing tea plant seeds into tea oil is added and the “shampoo” is complete. The women first run the shampoo through their hair, and then comb it whilst rinsing the shampoo out with fresh local spring water.

The Yao women grow their hair like this because they believe that long hair symbolises longevity so the longer your hair is, the longer your life is likely to be. Yao women only cut their hair once in their lifetime and this is when they turn eighteen years old. The cutting of the hair is a rite of passage, implying that the girl is now an adult and ready for marriage. The cut hair will be kept and styled into an ornamental headpiece, which is then reincorporated back into the woman’s hair when she is married. The Yao women are in fact characterised by this hairstyle, which consists of three bunches of hair. The first bunch of hair is her natural hair, the second is the hair from her first haircut, and the third is made from strands of hair that fall out during combing and are kept over time. All of this hair will be held in place using just a single comb.

The hair of a Yao woman is also a useful indication of her social status. If a woman’s hair is covered, this is an indication that she is unmarried. Traditionally, no man was allowed to see a woman’s hair until her wedding day, when her groom would be treated to an unveiling of her beautiful hair for the first time. If any man saw her hair before her wedding day, regardless of whether they were a villager or an outsider, they would have to stay with her parents for three years as if they were their son-in-law. If the woman’s hair is simply wrapped around her head, this indicates that she is married but as yet has no children. Finally, a small bun at the front of the head indicates that the woman is married with children.

Once you’re in Huangluo, you can enjoy performances of the women showing off their long, luxurious hair. These performances also incorporate singing and dancing, a favourite pastime of the Yao people. They sing sweet folk songs about the mountains, the terraces, the history of the Yao people, and many other themes close to their heart. The Yao people are incredibly friendly and hospitable, so don’t be too surprised if a local invites you into their home for a drink or simply to admire their rustic way of life. Unfortunately Huangluo is one of the few villages in the area that has been heavily developed for tourism, thanks to the unique appearance of the Red Yao women, so it can be quite crowded. If you want to get a taste of Yao culture without having to endure the crowds, we recommend visiting the villages of Dazhai and Tiantou in the Jinkeng Terraced Fields Area.

There are currently no official hotels or hostels in Huangluo. If you want to stay in the area overnight, we recommend staying at one of the hotels in Ping’an or Dazhai and traveling from there to Huangluo. To get to Huangluo, you first need to take an express bus from Guilin to Longsheng County Town or Heping Town, which takes about 2 hours. From Longsheng or Heping, you can take another bus that goes directly to Huangluo and takes just over an hour. Alternatively, you can take the bus from Longsheng to Ping’an and then hike from Ping’an to Huangluo, which only takes about 15 minutes.