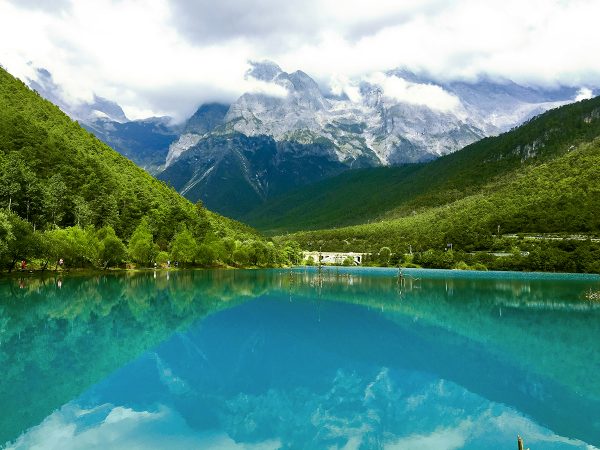 Long before recorded time, the Jade Dragon Snow Mountain and the Haba Snow Mountain were brothers who made a living panning the Jinsha or “Golden Sands” River. They lived a happy life, until one day an evil fiend attacked them and took over the river. But the brave brothers did not flinch. They took up arms and fought the fiend with all their might. Haba, the first brother, tragically died in the fight, but Jade Dragon was able to drive away the fiend using his 13 swords. Thereafter, Jade Dragon guarded the local villages and carried his 13 swords with him day and night. For their heroic deeds, the immortals transformed the two brothers into two snow-capped mountains, and Jade Dragon’s 13 swords became the 13 peaks of the Jade Dragon Snow Mountain. The people of the Naxi ethnic minority still revere the mountains as holy places and honour the memories of these two heroes to this day.

Each of the 13 peaks has an altitude of at least 4,000 metres (13,123 ft.) and at different altitudes up the peak you’ll find different temperature zones. This makes the mountain range a safe haven for rare animals and plants, with one fourth of all plant species in China being found on the mountain, and 20 primeval forests sheltering 400 types of trees and 30 species of animals that are under national protection. Its highest peak, known as Shanzidou, has an elevation of over 5,500 metres (18,300 ft.) and its dangerously high avalanche risk means it has only been climbed once. So, unless you want to get covered in a dragon’s length of snow, we recommend taking the cable cars!

Whether its holidaymaking, mountaineering, skiing, or hiking, this small mountain range caters to a variety of tourists. It’s only 15 kilometres south of Lijiang Ancient Town and the view from Lijiang’s Black Dragon Pool is considered one of the most magnificent in Yunnan. It is said that, from a distance, the fog-enlaced mountains look like a jade dragon lying in the clouds. This may be where the mountain range gets its name, but the epic Naxi tale of Jade Dragon and his 13 swords sounds far more enchanting, doesn’t it?

On the eastern side of the mountains, you’ll find Tiger Leaping Gorge, which offers a plethora of hiking trails that should not be missed. On the western side, there are still more hiking opportunities, with cable cars leading to Glacier’s Park, Dry Sea Meadow, Yak Meadow and Spruce Meadow. At an elevation of about 4,500 metres (14,757 ft.), the tram building at Glacier’s Park is one of the highest in the world and provides visitors with access to a glacier and a path that leads to the summit of a high peak, reaching altitudes of about 4,600 metres (15,350 ft.). For those of you who aren’t used to such dizzying heights, there are vendors on hand selling tanks of oxygen. The view from the peak is truly spectacular and, along the way, the snow is ripe for plentiful snowball fights!

The Dry Sea Meadow and Yak Meadow are both at an altitude of around 3,500 metres (about 12,000 ft.) and can be accessed by the same cable car. The Dry Sea Meadow was once a lake that has since dried up, while the Yak Meadow is grassy area where farmers graze their yaks. Both areas are extremely peaceful, as they draw few crowds, and there’s even a beautiful temple at Yak Meadow where visitors can rest and admire the simple but majestic yaks. Similarly, a third tram goes to Spruce Meadow, which is only at an elevation of about 3,200 metres (10,500 ft.) and is equally as tranquil.

On the south side of the mountain range, there is a small village known as Jade Water Village. Since it is only 8 kilometres north of Lijiang Ancient Town, its very accessible and provides still more sightseeing opportunities. From the village, you can either hike up the mountains or take a guided horse riding tour through the designated park areas. Jade Water Village and other small Naxi villages around the mountains also offer the chance to sample Naxi delicacies such as yak milk tea and yak steak. Just don’t take any of these tasty snacks up to Yak Meadow, or you might offend someone!