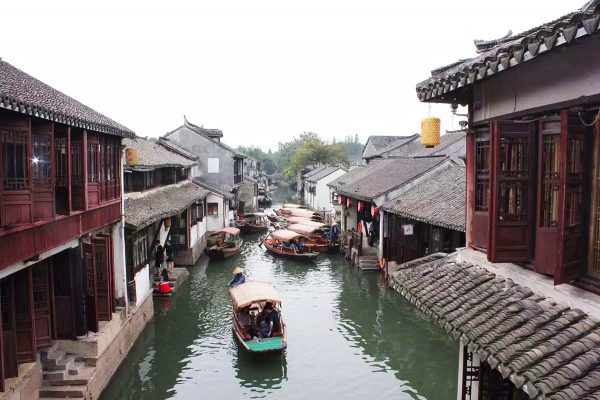 Bound by the Yellow Sea to the east and with the Yangtze River cutting through its southern expanses, it’s unsurprising that Jiangsu province has become synonymous with water. Its nickname, “the land of fish and rice”, reflects not only how important water is to it, but also how its huge rice-farming and fishing enterprises have made it one of the wealthiest provinces in China. Kind of like “the land of milk and honey”, only perhaps not quite as pleasant smelling!

The Yangtze River actually divides the province into two formal sections known as Jiangnan or “South of the River” and Subei or “Northern Jiangsu”. Jiangnan is by far the wealthier part of the province as it dominates the tourist, agricultural, and industrial trade, with famous cities such as Suzhou, Nanjing, and Wuxi all being located there. Subei is relatively poor by comparison and the northernmost parts of the region, such as Xuzhou, are far more influenced by northern Chinese culture. This cultural divide is most prevalent when it comes to language, as Jiangsu locals speak two mutually unintelligible dialects of Chinese: Mandarin[1] in the north and Wu in the south. When it comes to north-south divides, it doesn’t get much bigger than when you can’t even communicate with one another!

Yet this rift isn’t simply a cultural one, as the climate in the two regions is also vastly different. The south is humid and subtropical while the north is temperate and continental. Weather in southern Nanjing sits at a comfortable 2 °C (36 °F) in January and rises to a sweltering 32 °C (90 °F) in July, while temperatures in northern Jiangsu plummet to below 0 °C (32 °F) in winter, although its summers are largely the same.

Historically speaking, the Jiangsu region originally belonged to a kingdom known as the State of Wu until it was conquered by Qin Shi Huang, who unified China and founded the Qin Dynasty (221-206 BC). That being said, eager to maintain its independence, Jiangsu would frequently find itself outside of China’s borders! During the Three Kingdoms Period (220-280), it became part of the independent State of Dong Wu and its cultural development peaked from this period right through until the Southern and Northern Dynasties Period (420-589).

During the Sui (581-618) and Tang (618-907) dynasties, the completion of the Grand Canal[2] meant that several of its towns swiftly rose to prominence as important trade centres between southern and northern China. Yet the collapse of the Tang Dynasty saw Jiangsu once again, like a rebellious teenage daughter, secede from imperial China and become part of the Southern Tang State (937–976) during the Five Dynasties and Ten Kingdoms Period (907-960). When it was finally reabsorbed in 976, during the Song Dynasty (960-1279), it reached its golden age as an emerging market economy and, with the rise of a wealthy merchant class, cities like Yangzhou and Suzhou soon became synonymous with luxury and opulence.

Further prosperity followed during the Ming Dynasty (1368-1644) as the region became the centre for sericulture, yet it wasn’t until 1667, during the Qing Dynasty (1644-1912), that the province of Jiangnan was finally split into modern-day Jiangsu and Anhui provinces. The name “Jiangsu” was derived from the names of the two most important prefectures at the time: Jiangning and Suzhou. As China slowly opened to foreign trade during the 1840s, the province was increasingly exposed to Western influence and this had a profound effect on its culture, art, and architecture.

In 1928, the leader of the Chinese Nationalist Party, Chiang Kai-shek, made Nanjing the country’s capital and used it as his base of power to bring most of China under his control. But in 1937, during the second Sino-Japanese War (1937-1945), tragedy struck when the Japanese captured Nanjing and carried out a horrific three-month-long campaign known as the Nanjing Massacre. This dark chapter in China’s history is still evidenced by the Nanjing Massacre Memorial, which is one of the focal sites in the city.

Since Nanjing served as the country’s capital during both the Ming Dynasty and the Republic of China (1912-1949), it is widely considered to be Jiangsu’s historical centre. It boasts a number of important sites, including the Ming Xiaoling Mausoleum, the Temple of Confucius, the Sun Yat-sen[3] Mausoleum, and the Presidential Palace.

The province itself is a cultural mecca for south China and is the home of many famous traditions, including a style of Chinese opera known as kunqu, an ancient form of storytelling known as pingtan, and its speciality dishes, which are listed as one of the Eight Great Traditions of Chinese Cuisine. It’s is also well known for its renowned handicrafts, such as embroidered brocade from Suzhou, clay teapots from Yixing, lacquer ware from Yangzhou, and clay figurines from Wuxi.

Yet one of the major draws to Jiangsu has always been its stunning natural scenery and beautiful canals. With their Venetian waterways, verdant classical gardens, and breath-taking architecture, water-towns like Suzhou and Zhouzhuang have become known as some of the most picturesque places on earth. In fact, there is a popular saying in China which states: “Above there is heaven; below there is Suzhou and Hangzhou[4]”. High praise indeed!

[1] This is not to be confused with Standard or Mandarin Chinese, which is different.

[2] The Grand Canal: It is the longest canal in the world and starts in Beijing, passing through the provinces of Hebei, Shandong, Jiangsu, and Zhejiang before eventually terminating in the city of Hangzhou. It links the Yellow River to the Yangtze River and the oldest parts of it date back to the 5th century BC, although most of its construction took place during the Sui Dynasty (581-618).

[3] Sun Yat-sen (1866-1925): A Chinese revolutionary who played an instrumental role in overthrowing the Qing Dynasty, abolishing imperial rule and founding the Republic of China. He became the first president of China in 1912.

[4] Hangzhou is the provincial capital of Zhejiang province and thus does not belong to Jiangsu province.