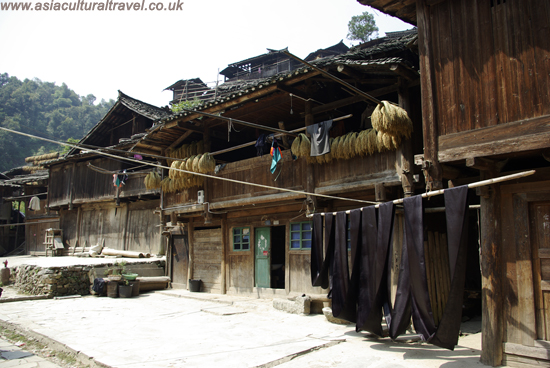 Obscured by misty mountains and dense green forests, Yintan is a gem largely hidden from the rest of the world. This small Dong village just 20 kilometres (12 mi) north of Congjiang City is home to 1,700 people in 354 households and, isolated as it is, has harboured traditional Dong culture for generations. The gate is flanked by ancient Chinese yew trees, which give the village an air of mysticism as you enter. Even the name “Yintan” (银潭), meaning “Small Silver Lake”, has a certain ethereal quality to it.

Since it is so remote and has not yet been geared up for tourism, visitors rarely venture to Yintan and this only adds to its undeniably charm. While in the more popular Dong villages you’ll find yourself regularly rubbing elbows with other tourists, in Yintan the peaceful atmosphere means you can truly relax and enjoy traditional Dong culture.

The village is home to numerous Diaojiaolou, or wooden houses suspended on stilts, which climb up the mountain and mingle seamlessly with the natural scenery. These stilted dwellings are punctuated by three magnificent drum towers, which were all built during the Qing Dynasty (1644-1912) but are of different styles. Though their paint may have faded and their wood may be chipped, watching the sun set behind these towering edifices on a balmy summer’s evening is still just as breath-taking. 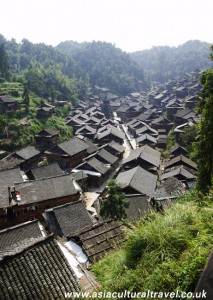 Yintan has also managed to maintain a few ancient opera stages, where performances of all kinds take place. From hearty dancing to piercing opera, the village locals really know how to enjoy the simple things in life! Unlike many other Dong communities, where youths only don their traditional outfits on festival occasions, almost all of the villagers in Yintan regularly wear their characteristic indigo-coloured clothes all year round. These clothes are handmade using the ancient tradition of cloth weaving and dyeing, which was passed on to them by their ancestors.

Almost every household in the village has a barrel for preparing indigo dye and almost every piece of clothing worn by the locals will have been made entirely by them. If you happen to be passing through Yintan on a hot summer’s day, you may even notice the freshly dyed clothes hanging from the balconies. Just don’t stand under them, or you’ll end up with indigo hair!

Join our travel to visit the tranquil Yintan Village: Explore the culture of Ethnic minorities in Southeast Guizhou