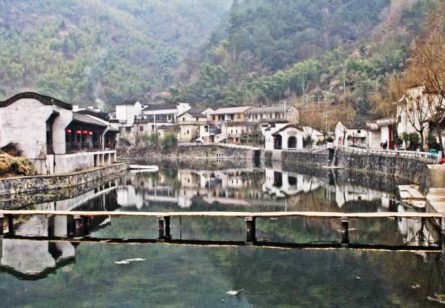 As a part of Huizhou, Jixi also has a long history of making ink. In the Qing Dynasty (1644-1911), the “Appraisal of Antiques House” and the “Hu Kaiwen Ink House” were very successful in the ink business. Buildings in Jixi are also famous for the three styles of Hui carving – brick carving, woodcarving and stone carving.

Hui Cuisine is one of the eight types of Chinese cuisine Hui cuisine originated from Jixi. In the beginning, Hui Cuisine was a kind of indigenous cuisine with strong regional characteristics. It was not until the Ming Dynasty (1368-1644) and Qing Dynasty, when the Hui merchants were economically thriving, that Hui Cuisine began to incorporate the advantages of other types of cuisine and developed into a more wholesome style via the process of exchanging qualities with other local cuisines.

Jixi has both fragile old buildings and beautiful landscapes. The Cooling Peak area is one of the national reserves, with an abundance of fauna and flora. In Shangzhuang Village, you can find the former residence of Hu Shi (a famous scholar from the early 20th century), which was built in 1897. The Hu’s Ancestral Hall, located in Yingzhou Town, was built for Hu Fu and Hu Zongxian, high-ranking officials from the Ming Dynasty. In 2007, Jixi was awarded status as a national historic and cultural city.