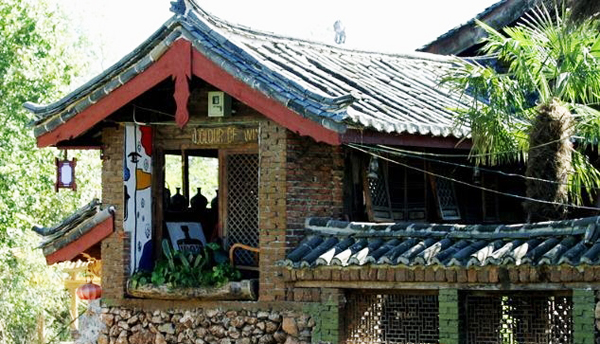 While Baisha Village was the birthplace of the Mu clan and Dayan Town (modern-day Lijiang Old Town) was the metropolis where they guided the ethnic Naxi people to prosperity, Shuhe Town trumps them both as the first known settlement of Naxi people in Lijiang County. It is unsurprising that, like its two historic cousins, Shuhe Town was included by UNESCO as a World Heritage Site. This sleepy little town rests in the idyllic countryside about 4 kilometres northwest of Lijiang Old Town and sits at the foot of the Jade Dragon Snow Mountain, which is pretty apt considering the Naxi word “shuhe” literally means “a village at the foot of a peak”! Though it may lack the bustling lifestyle of Lijiang Old Town or the abundant cultural artefacts of Baisha Village, its charm lies in its peaceful rural simplicity.

The town is made up of 1,000 households, each built using rocks that were harvested from the nearby mountains, and its 3,000 residents make a humble living from farming, tourism and leatherworking. Like Lijiang Old Town and Baisha Village, it was once an important trade hub on the ancient Tea-Horse Road. However, Shuhe’s originality lies in its history, as the town perfectly exhibits how the ancient Naxi people made the transition from an agricultural civilization to a commercial culture. While Lijiang Old Town and Baisha both effectively started out as trading centres of the Mu clan, Shuhe was transformed from a humble farming village into an instrumental transportation centre. This is evidenced not in grand murals or historic epics but in the architecture of the town itself, which slowly developed from simple wooden dwellings to elaborately decorated stone mansions.

Qinglong Bridge is just one of these stone structures and dates back to the Ming Dynasty (1368-1644). This 400-year-old bridge is about 25 metres long and its worn flagstones serve as a reminder of the many thousand feet that have tread its length over the years. It is considered to be the first old stone bridge built in Lijiang County but, in spite of its age, it has yet to retire! 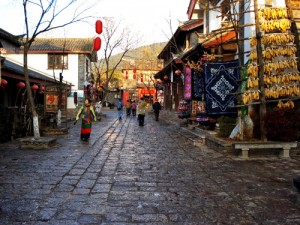 Shuhe is sometimes referred to as Longquan or “Dragon Spring” Village because of the sacred spring at the end of its main street. This bubbling spring, known as Jiuding Dragon Pool, can supposedly be heard from miles away and the local Naxi people believe the fish that reside in this pool are the spirits of gods. That being said, eating the fish will not give you godlike powers so don’t go fishing in the pool or you’ll be chased out of the village! The spring was considered so sacred that a temple, known as Beiquan or “North Spring” Temple, was built just behind it. The locals still pray here and the majestic Sansheng Palace, the most architecturally unique part of the temple, is decorated with art handcrafted by Shuhe’s master leatherworkers.

The town is wonderfully tranquil, but take a trip to the square on market day and you’ll be met with a cacophony of footsteps, laughter, and the shouts of vendors plying their wares. It’s the perfect opportunity to embed yourself in the daily life of the Naxi people and peruse the local stalls, where you may pick up a few souvenirs. Though your suitcase may be weighted down with handcrafted leather bracelets and Naxi embroidered silk portraits, your wallet will certainly end up a little lighter!

Along the main waterway, there are a number of restaurants serving Naxi and Western-style food. With the verdant mountains above you and the trickling streams below, be sure not to get too carried away admiring the landscape or your food might go cold! The peak tourist season in Shuhe is between May and October but, if you have the chance, we recommend visiting the town outside of peak season to avoid the crowds.