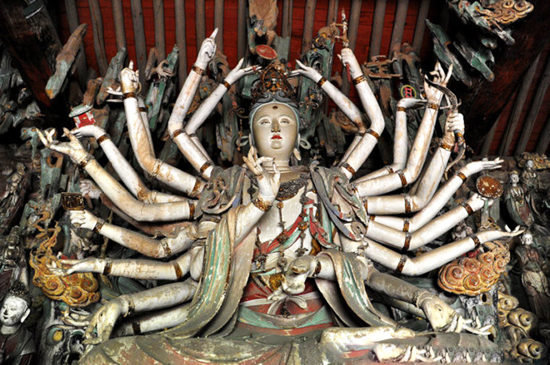 Just 6 kilometres (4 mi) southwest of Pingyao Ancient Town, nestled deep within the countryside of Shanxi, the small village of Qiaotou hosts one of the most magnificent Buddhist temples in China. The Shuanglin Temple, which is included under Pingyao as a UNESCO World Heritage Site, is noted not only for its venerable age but for the more than 2,000 painted statues that decorate its halls.

This vast collection, made by moulding clay over wooden frames, has earned the temple the nickname “The Museum of Coloured Sculptures”. They are not purely works of religious art, but instead are imbued with human features and attributes to symbolise the unification of the spiritual and the physical, or rather the connection between deities and human beings.

Unfortunately the lack of historical documents has meant that researchers currently do not know exactly when the temple was first built. However, the oldest stone tablet within the complex indicates that it was rebuilt in 571 AD during the Northern Qi Dynasty (550-577) and two huge locust trees, planted during the Tang Dynasty (618-907), attest to this ancient origin. It’s estimated that the temple itself is over 1,400 years old, although it underwent large scale restoration throughout the Ming (1368-1644) and Qing (1644-1912) dynasties and much of its surviving architecture reflects those styles. Bear in mind, when you’re 1,400 years old, you need a little extra help to keep looking good!

It was originally called Zhongdu Temple but was renamed Shuanglin during the Song Dynasty (960-1279). The term “shuang” means “two” or “double” while “lin” means “woods”, and together the name refers to one of Sakyamuni’s[1] sutras[2] in which he states that “nirvana is between two trees”. Unfortunately he never specified which two trees they were!

The many sculptures littered throughout the temple were carved between the 12th and 19th centuries. Their height varies from 30 centimetres (1 ft.) right up to nearly 4 metres (13 ft.) and the vast majority are of Buddha or various bodhisattvas[3], but a few are warrior guards, heavenly generals, and even common people. Their colourful backdrops are resplendent with mountains, rivers, clouds, flowers, and dense forests.

The complex is surrounded by a high wall with a gate, giving it the appearance of a fortress. Buddhism may be a peaceful religion, but it still has to protect itself! The inner temple consists of three main sections: the ten main halls in the centre; the sutra library and monks’ living quarters in the east; and a courtyard to the west.

In the Hall of the Heavenly Kings, a sculpture of the deity Maitreya sits at the centre, while the Four Heavenly Kings rest in the north. They are all 3 metres (10 ft.) in height and each one carries an implement of symbolic importance. The first has a pipa[4], which symbolises earth; the second has a sword, which represents gold; the third has a snake, which signifies wind; and the final one holds an umbrella, which unsurprisingly denotes water. Together these instruments are meant to bless the worshipper with good weather, abundant crops, and subsequent wealth. After all, who would pray for a bunch of snakes and umbrellas?

The Arhat Hall is home to a large sculpture of Guanyin, the Buddhist deity of mercy, flanked by eighteen sculptures of arhats[5]. The face and aspect of each arhat is different; one is drunk, one is sick, some are fat, and some are thin. They are all designed to show off the artisans’ particular skill at carving and among them the mute arhat is considered the most magnificent.

His facial expression is heavily exaggerated, with pursed lips, a deeply furrowed brow, and piercing eyes, and his chest and belly are distended, as if to suggest he is struggling to breathe. His expression, coupled with his posture, implies that he has seen much injustice in the world but, as a mute, can only communicate his frustration through his body language.

In the Thousand-Buddha Hall, there is another statue of Guanyin with her right leg bent and her left leg placed delicately on a lotus leaf. A wonderful sculpture of Skanda, the celestial guardian devoted to protecting Buddhist monasteries, is at her side. The 500 statues and paintings within this hall are often studied to help recreate traditional outfits of the Ming Dynasty.

Yet another statue of Guanyin takes centre-stage in the Bodhisattva Hall, but this time in the style of the Thousand-Armed Guanyin. Remember she’s the deity of mercy, not modesty! The statue does not literally have a thousand arms, but the many clawed hands that surround this figure are both strangely attractive and intimidating. It’s bad enough being tickled by just two hands, but imagine how it would feel with twenty!

[3] Bodhisattva: The term literally means “one whose goal is awakening”. It refers to a person who seeks enlightenment and is thus on the path to becoming a Buddha. It can be applied to anyone, from a newly inducted Buddhist to a veteran or “celestial” bodhisattva who has achieved supernatural powers through their training.

[4] Pipa: A four-stringed plucking instrument that has a pear-shaped wooden body and anywhere from 12 to 26 frets. It is sometimes referred to as the Chinese lute.

[5] Arhat: A “perfected person” who has achieved enlightenment by following the teachings of Buddha.

Join our travel to visit the Shuanglin Temple in Shanxi: Explore Chinese Culture through the Ages

One Reply to “Shuanglin Temple”