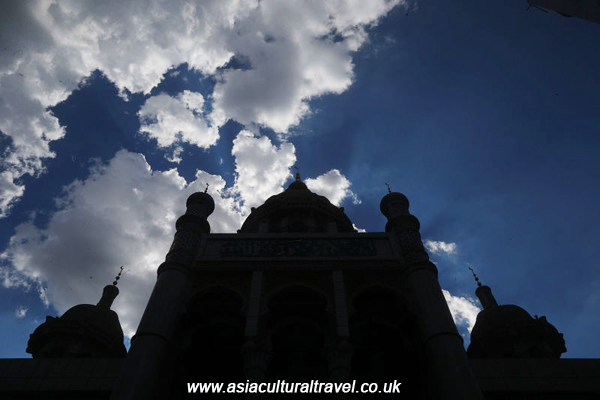 If you think Ürümqi doesn’t look like a particularly Chinese name, you’d be right! It derives from the Oirat words for “beautiful pasture” and was so-named because, before Xinjiang came under national control, it belonged to the Dzungar Khanate, a rival kingdom ruled by a Mongol subgroup known as the Oirats. As the capital of Xinjiang, it is only befitting that Ürümqi should have an Oirat name. Located on a fertile patch of land along the northern slope of the Tian Shan Mountains, it features in the Guinness Book of World Records as the most inland city in the world and is over 2,500 kilometres (1,600 mi) away from the nearest coastline. So, if you’re taking a trip to Ürümqi, you may want to forgo packing the beach gear!

Although the Han ethnic group still represent the majority in the city, a large portion of its 3-million-strong population are religiously Muslim and so it boasts over 200 mosques. Its substantial constituency of Uyghur people means it has largely remained a culturally Uyghur city and the Turkic Uyghur language is the most widely spoken. Other prevalent ethnic minorities include the Kazakh, Kyrgyz, Mongol, Hui, and Manchu people. With all these cultures and languages mingling together, it’s no wonder Ürümqi is regarded as Xinjiang’s melting pot!

It was once one of the many trade hubs along the Silk Road, but its importance paled in comparison to the city of Turpan just 200 kilometres (120 mi) to its southeast. The area around the city first came under imperial control during the 7th and 8th centuries, but was abandoned by the Tang Dynasty (618-907) in the 750s. It wouldn’t be fully recovered until the Qing Dynasty (1644-1912), when the imperial court established military colonies in the area and founded the city of Dihua in 1763. This city, which would eventually become modern-day Ürümqi, grew rapidly into one of the most important trading centres in Central Asia. After so many years spent in the shadow of its big brothers Turpan and Kashgar, the city was finally ready to shine!

Nowadays one of its crowning jewels is the Erdaoqiao or Grand Bazaar, a traditional Muslim market area. It’s the ideal place to sample some traditional Uyghur delicacies, browse through the stunning locally-made handicrafts, and perhaps pick up a few souvenirs.

The Hong Shan or Red Mountain is the symbol of the city and is located in Hongshan Park. It is named for the reddish-brown colour of its rocks and, though it’s more of a hill than a mountain, visitors still hike to the top regularly to enjoy the panoramic view of the urban sprawl below. The Buddhist temple and pagoda only add to the park’s aesthetic with a touch of manmade beauty.

As the cultural centre of Xinjiang, the city simply wouldn’t be complete without a few museums! The Xinjiang Regional Museum hosts a myriad of cultural relics, including pottery, weapons, terracotta figures, and even some mummies that date back to sometime between 2,000 BC and 400 AD! The Xinjiang Silk Road Museum is full of fascinating exhibitions about the history of the Silk Road and is fittingly located right next to the Grand Bazaar. What better way to learn about China’s ancient trading past than with the sounds of the bustling market in the background? 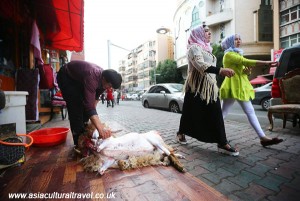 When it comes to food, you’re never too far away from a freshly baked naan, smoulderingly spicy kebab, or steaming bowl of pilaf rice! Xinjiang is renowned throughout China for its delicious cuisine, with punchy flavours reminiscent of its Central Asian cousins.

Nature lovers need only venture a short way out of Ürümqi to find some of the most exquisite scenery in Xinjiang. Just 70 kilometres (40 mi) to the south, a grassy mountain area known as South Pasture stretches as far as the eye can see. Its home to the Kazakh ethnic minority, who have continued to herd sheep, cattle, and horses on these verdant grasslands as their ancestors once did centuries ago. Visitors can even stay overnight in yurts and sample some of the spicy local cuisine. About 110 kilometres (70 mi) to city’s east, the Tian or Heavenly Lake fills one of the craters high on the Bogda Mountains and welcomes visitors to enjoy its shimmering sapphire waters, a refreshing change from the characteristic deserts of the region.

Join a travel with us to explore more about Ürümqi: Explore the Silk Road in China