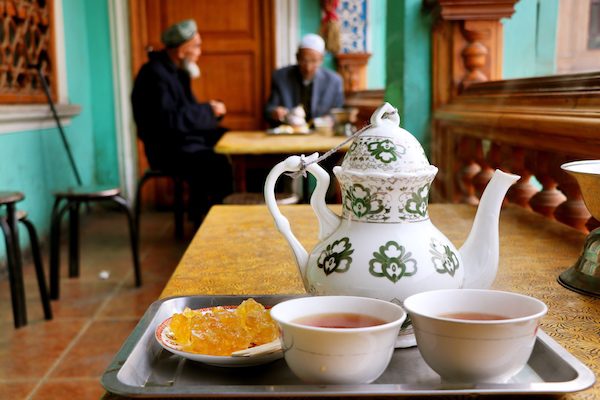 The vibrant oasis city of Kashgar rests at China’s westernmost point and is located near the border with Tajikistan and Kyrgyzstan. It lies on a fertile stretch of land at the base of the Pamir Mountains, towards the western end of the Tarim Basin. Its population of just 500,000 people is made up predominantly of the Uyghur ethnic minority, whose culture largely dominates the city. So be prepared for bustling markets, colourful silks, and noisy livestock ambling through the streets!

The city’s location means the climate in the area is extremely arid. Average temperatures range from a mild −6 °C (21 °F) in January to a sweltering 26 °C (79 °F) in July, with an average precipitation of just 77 millimetres (3 in) per year. To put that into perspective, good old foggy London receives about 594 millimetres (23 in) of rainfall per year, over seven times that of Kashgar. So be sure to buy plenty of bottled water and forgo packing your umbrella!

It was once a major trade hub along the Silk Road, serving as the meeting point where its northern and southern branches finally met. The earliest mention of the city dates back to the Han Dynasty (206 BC–220 AD), when an imperial envoy travelled along the Northern Silk Road in order to explore the unknown lands to the west. The Chinese first took control of the area from the Yuezhi people in the 2nd century BC, but the Yuezhi swiftly reoccupied the area during the 1st century BC. This short-lived conquest would be characteristic of the region, as it would change hands many times!

The Chinese weren’t able to recover the territory until the late 7th and early 8th century, during the Tang Dynasty (618-907), but soon lost it once again in 752. Talk about unlucky! From then on, it was successfully occupied by the Turks in the 10th century, the Uyghurs in the 11th century, the Kara Khitans in the 12th century, and finally the Mongols in 1219. Under these rulers, trade between China and Central Asia flourished as it never had done before.

Unfortunately the city suffered greatly throughout the 14th century due to numerous wars and wasn’t reoccupied until 1755, during the Qing Dynasty (1644-1912). Yet peace wouldn’t grace Kashgar for long, as it was soon the centre for two Muslim rebellions. This social and political unrest lasted until 1943, when the city was finally restored to the Chinese government’s control.

The old part of the city has long been revered as one of the most well-preserved examples of a traditional Muslim city. Its characteristic mud-brick houses, though slightly dilapidated, still make for a stunning panorama when viewed from above. Gazing out over this ancient city, with the sun beating down on you and the Silk Road before you, one could even fancy themselves as a sort of modern-day Lawrence of Arabia!

Nowadays the city’s greatest draw is its lively Sunday market, which attracts thousands of merchants and tourists each week. Though the livestock market only functions on Sundays, the ordinary market continues throughout the week and is the ideal place to pick up a few locally made handicrafts, such as carpets, wooden jewellery boxes, and copper teapots. On market-day the city is alive with the sound of merchants from across China and Central Asia, just as it once was thousands of years ago. There are currently 20 large-scale bazaars operating in Kashgar, of which the largest is the one located near the East Gate. From the rich fragrance of meaty kebabs to the soft touch of hand-woven silk, the market is a real awakening of the senses.

Nestled within the heart of the city, Id Kah Mosque is the largest mosque in China and was originally built in 1442, although it has undergone major expansions and restorations since then. It’s a beautiful example of traditional Uyghur-style architecture and its religious significance only adds to its prestige. Yet it is tragically dwarfed in importance by the Tomb of Afaq Khoja just 5 kilometres (3 mi) northeast of the city centre, which is widely considered the holiest Muslim site in Xinjiang.

The tomb was built in 1640 and contains the remains of the religious and political leader Afaq Khoja, along with those of five generations of his family. He is regarded by several Muslim communities as a great Saint or Auliya. However, the greatest draw for many domestic tourists is the tomb of Xiang Fei, which rests within the complex. She was the only Uyghur woman to be taken as a concubine by a Chinese emperor and is occasionally referred to as the “Fragrant Concubine”, as it was rumoured she had a naturally enchanting aroma.

About 191 kilometres (120 mi) outside of the city, the spectacular Karakuri Lake stretches out at the foot of Mount Muztagata and marks a refreshing change from the typically barren landscape of Xinjiang. It looks like a crystal clear mirror, reflecting the surrounding grasslands, snow-covered mountains, and azure sky in its watery expanse.