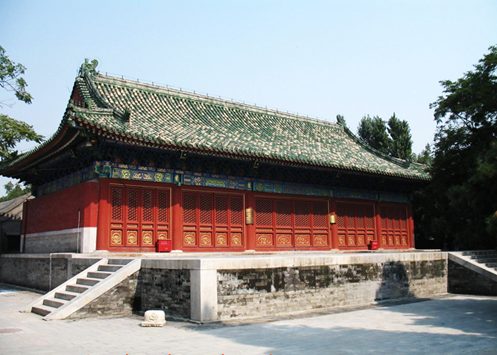 The Temple of the God (Creator) of Agriculture was the site of imperial sacrifices dedicated to the cult of Shennong, the Holy Farmer. It is located in the southern part of the city, directly to the west of the Temple of Heaven, and occupies a total area of three-square kilometres.

According to ancient Chinese legend, there were three wise kings, referred to as Fu Xi, Shennong and Suiren. Fu Xi was the ruler of greatest antiquity, credited with the invention of hunting and fishing and the domestication of animals; Shennong was the second ruler and he was supposed to have invented the plough and discovered the curative properties of certain plants. Suiren was the third legendary ruler and he supposedly discovered fire.

According to the rites of the Qing Dynasty (1644-1911), on the day of the Vernal Equinox, as fixed by the lunar calendar, the emperor would come to this altar to make a sacrifice to the sacred tablet of Shennong. Following this ceremony, the emperor would plough several furrows of land with his own hands. These would be the first furrows ploughed in that year. Then the emperor would go back to the observation platform to watch the princes, ministers and a representative group of ordinary people finish the task.