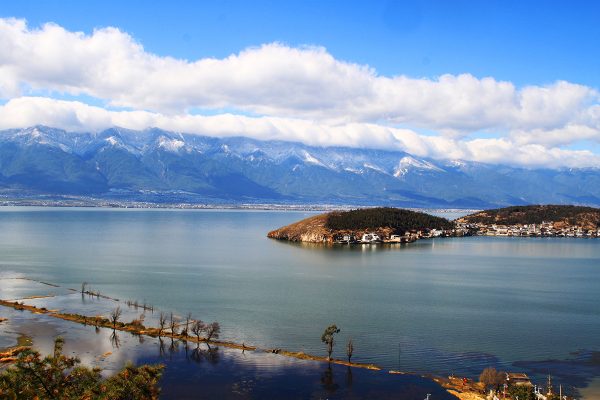 A long time ago, the Plague God terrorised the city of Dali and its people suffered from endless calamity. In order to save them from this pestilence, a brother and sister from the tribe went far away to study magic. When they returned, they were so skilled in the arcane arts that they were able to banish the Plague God to the top of the Cangshan Mountains. When he reached the highest peak, he froze solid. The sister transformed into the God of Snow, settled on Xueren Peak, and vowed to keep him at bay. She is the one who keeps the mountains capped with snow year round so that he never thaws out.

From Malong, with its 4,122-metre-high summit, to Cangshan’s other 18 peaks, which each reach heights of over 3,500 metres, this mountain range is not for the faint of heart. Scaling its peaks entails hours of arduous struggle, scrabbling up the rock and beating back the sweltering heat. Or you could just take the cable car! Two cable cars operate on Cangshan and provide easy access to its peaks. The mountain range itself is massive, with plenty of natural and manmade attractions to fill an entire day, but how you choose to take advantage of it is up to you!

Cangshan has garnered great fame as the only place in Dali where you can see the city’s Four Famous Scenes; wind, flowers, snow, and the moon. Of course you can’t actually see the wind, but on top of those lofty mountains you can certainly feel it! It boasts a diverse plant population, with over 3,000 plant species thriving on its peaks. Eighteen streams run between the peaks and provide ample water to the verdant flora and dense forests. The mountains’ great elevation means that, in spite of the temperate climate, they are perpetually capped in snow, and the moonlight reflected off of their silvery summits is considered a sight unmatched throughout Yunnan.

Yet all of these delights pale in comparison to Cangshan’s most exciting feature; the clouds! The clouds above Cangshan are notoriously changeable, and can go from silky white to ink black in a matter of minutes. Several cloud formations, including the Yudai Cloud, which looks like a fairy holding a jade belt, and the Wangfu Cloud, which looks like a wife expectantly waiting for her husband, are so common that they have even been named.

According to local legend, the Wangfu Cloud is actually the spirit of Ah Feng, a princess of the ancient Nanzhao Kingdom. She fell in love with a poor hunter named Ah Long, but when her father discovered the two together he had Ah Long killed and thrown into Erhai Lake. Ah Feng died of a broken heart and her soul floated up into the sky, where it waits patiently for her lover to return. So you see, there’s more to clouds than meets the eye. If you look hard enough, you may even see the spirit of that goldfish you once flushed down the toilet!

If you plan on hiking up the mountains, we recommend first heading from Dali Ancient Town to Zhonghe Temple. You can either take the cable car, which takes about half an hour, or hike on foot, which takes between 2 to 3 hours. Zhonghe Temple is the only place on the mountain range with a restaurant and stores where you can replenish your supplies, and also acts as a nexus for many of the hiking paths. If you fancy a steady hike, we recommend the Cloud Pass, which starts at the temple and is 20 kilometres long but is well-signposted, reasonably flat and has been paved. It leads to several streams, winds around many of the peaks, and even leads to three of the temples on the mountain, including Inaction Temple and Qingbi Temple.

The best time to visit Cangshan is late summer to early autumn, so that you avoid the rainy season but still benefit from the warm weather. However, the weather is extremely changeable on the mountains so we strongly recommend you carry warm clothes with you. Be sure to prepare enough food, water and other supplies, as the hike to the nearest store is a long one and the last thing you want is to end up nibbling on the grass!

2 Replies to “The Cangshan Mountains”