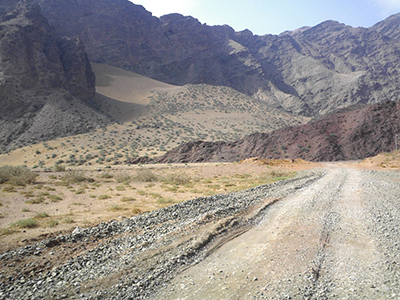 Flanked by unforgiving desert to the west and irrigated farmland known as the Yinchuan Plain to the east, the Helan Mountains form the border between Inner Mongolia and Ningxia. This colossal mountain range stretches for approximately 200 kilometres (124 mi) from north to south, with the Yellow River flowing northward parallel to it. While it averages at about 2,000 metres (6,562 ft.) in altitude, its highest peak is a staggering 3,556 metres (11,667 ft.) tall. To put that into perspective, it’s nearly three times the size of Ben Nevis in Scotland!

Yet the range’s spectacular height is not its only claim to fame. Over 10,000 rock carvings dating from the Neolithic Period (c. 8500-2100 BC) to the Zhou Dynasty (c. 1045-256 BC) are scattered throughout the mountains, many of which are over 3,000 to 10,000 years old! The main concentration of carvings can be found at Helankou, a cavernous gorge that cuts north-west through the mountain chain. While the Helan Mountains acted as natural boundary between the nomadic pastoralists in the north and the sedentary farmers to the south, Helankou represented one of the view places where their diverse lifestyles met. 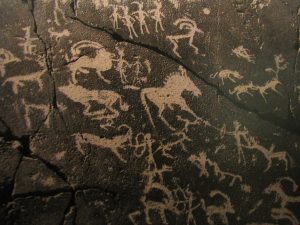 The Helankou Rock Engravings Park and the nearby Yinchuan World Rock Art Museum are the ideal place to discover how these ancient peoples used rock carvings to celebrate and immortalise their simple way of life. The park is the only place where the public is allowed to view the rock carvings, which are usually concentrated in clusters about 10 metres (33 ft.) above the valley base. The engravings themselves are separated into three types: human figures, animals, and symbols.

The human figures typically portray scenes of daily life, such as hunting, herding, making sacrificial offerings to deities, battling, dancing, and procreation. The animal engravings depict creatures that these ancient people either farmed or came across, including tigers, leopards, sika deer, sheep, cattle, horses, and camels. They have provided researchers with invaluable insight into the kind of animal species that once populated the mountains. The symbols tend to be much more complicated and are mainly mask-like faces imbued with a deeper meaning, the most obvious of which is a sun-shaped mask representing the Sun God.

That being said, while the rock carvings may be simple in design, the explanation behind them is relatively speculative. Many historians believe that they may have held some kind of shamanic[1] significance, particularly with regards to the symbols, while others posit that they are of a less spiritual and more documentary nature. Regardless of their origins, these fascinating carvings allow visitors to engage with ancient history in a meaningful and palpable way. Other nearby attractions include the Suyukou Forest Reserve, a vast woodland area filled with unusual rock formations, and Gunzhong Pass  (Rolling Bell Pass), a delightful summer resort designed for the avid hiker.

After all that hiking and sightseeing, you’re bound to be a little thirsty. Fortunately, the Helan Mountains are one of the main centres for the production of wine! Since wines from Ningxia have gained a certain prestige and popularity in China, companies are monopolising on the opportunity by setting up wineries on the mountain range’s eastern base. Whether it’s a robust red or a dry white, your trip to the Helan Mountains is sure to leave you wining!