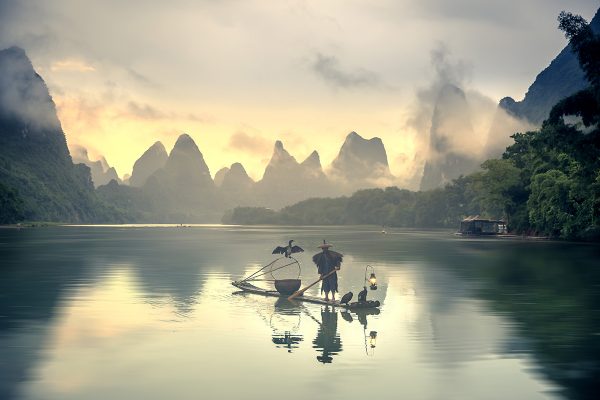 The Li River, also known as Lijiang, is probably the most famous scenic spot in all of Guangxi. It is so prominent that a tableau of the Li River is featured on the Chinese 20 Yuan note. The river is surrounded by Karst Mountains, which boast such unusual shapes and verdant greenery that they have an almost mythical appearance. The Li River has become one of Guangxi’s most popular tourist attractions and a number of different river cruises are now available, allowing visitors to experience the majesty of the Karst Mountains first-hand.

Many of these cruises focus on the stretch of river between the city of Guilin and Yangshuo County Town, which is about 83 kilometres (52 miles) long. They usually start at Zhujiang Wharf, which is about 40 minutes’ drive from Guilin, and can take upwards of 4 to 5 hours to reach Yangshuo. The scenery between Guilin and Yangshuo is truly stunning and many of the scenic spots, such as Elephant Trunk Hill, have been given special names based on their appearance or on legends that relate to them. If you take a tour on one of the many luxury cruise ships leaving from Zhujiang Wharf, your guide will undoubtedly treat you to a few of the delightful fairy tales and myths behind some of these scenic spots.

As you travel along the Li River, you’ll notice wild and domestic water buffalo grazing on the riverbanks or swimming in the river, farmers with their conical hats working on the rice paddies, and a unique type of fisherman found only in Guangxi. These ingenious fishermen use cormorants to fish for them, which they train from birth. These large, black waterfowl dive into the rushing water, swimming underneath the surface and snapping up fish. They then return to the boat, where the fisherman pulls the fish out of their gullets. The fisherman will have tied a fine thread around the cormorant’s throat, which is what stops it from swallowing the fish. Once the fishing is complete, the fisherman will release the tie on the cormorant’s throat and reward it with a few small fish. Normally one fisherman will be accompanied by two cormorants and will traverse the river using a slim, bamboo raft. Unfortunately this type of fishing is a dying art and is now primarily used to attract tourism rather than as an effective means of fishing.

Alternatively, if you don’t want to take such a long cruise, you can always head straight to Yangshuo and take one of the simple bamboo raft cruises up a small portion of the Li River. This usually only takes a couple of hours at most and still provides many wonderful views of the Karst Mountains and popular scenic spots along the river.

Enjoy the beautiful Li River on our travel: Explore the culture of Ethnic minorities in Southeast Guizhou