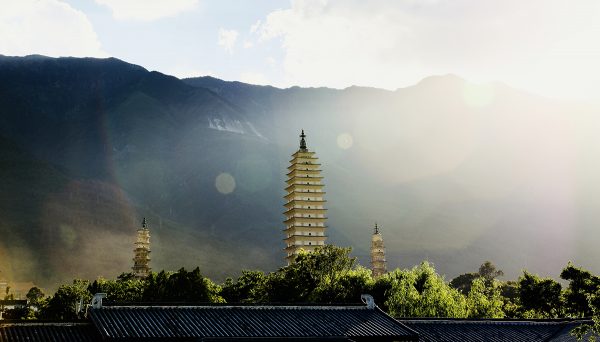 Rising up alongside the magnificent Cangshan Mountains, the Three Pagodas of Chongsheng Temple are an architectural wonder that is certainly protected by the gods. In 1925, during what was considered the most severe earthquake ever to hit Dali, only one out of every hundred buildings survived. Yet the Three Pagodas came out unscathed. Over a period of more than a thousand years, these towering monuments have witnessed numerous natural and man-made disasters, and have miraculously remained undamaged to this day. Nowadays they are the must-see tourist attraction in Dali and one of the few enduring remnants of China’s ancient past.

They are located about 1.5 kilometres away from Dali Ancient Town and rest at the foot of Yinglo Peak on the Cangshan Mountains. All three pagodas are made of brick that has been covered in white mud and they are arranged on the three points of a symmetric triangle. It is believed they were built for auspicious reasons as, according to local legends, Dali was once a swamp that acted as a breeding ground for dragons! When humans came to populate the area, they did not want to anger the frisky dragons, as it was well-known that dragons could cause natural disasters, so they built the three pagodas. Why, you ask? Because dragons are terrified of pagodas, of course! The ancient people believed these three pagodas would deter the dragons from returning and, as there hasn’t been a dragon sighting in over 1,000 years, I think we can firmly say that it worked.

The main pagoda at the centre, known as Qianxun Pagoda, is both the oldest and the most magnificent. The Nanzhao Kingdom (738-902) ruled over most of Yunnan during the Tang Dynasty (618-907) and King Quan Fengyou of Nanzhao built the pagoda sometime between 823 and 840 AD. At a colossal 70 metres (227 ft.) in height, it is one of the tallest pagodas in Chinese history. It is sixteen storeys high and is distinctly square-shaped, giving it a powerful elegance amongst the looming mountains.

As you marvel at this fine pagoda, it’s hard not to detect its resemblance to the Small Wild Goose Pagoda in Xi’an. Don’t worry; your eyes aren’t playing tricks on you! The designers of Qianxun Pagoda reputedly came from Chang’an (modern-day Xi’an) and this is why the pagoda is built in the traditional Tang-style. Tragically, the ladder that recently provided access to the upper storeys has collapsed so there is currently no way to climb Qianxun Pagoda.

In 1978, during a major restoration project, over 700 Buddhist relics, including statues made of gold, silver, wood and crystal, were found inside the pagoda. A number of ancient Buddhist documents and over 600 traditional medicinal ingredients were also excavated. These artefacts have provided historians with invaluable information about the history of the region, but have failed to answer the most pertinent question; how did so many people manage to miss spotting 700 statues? I could understand walking past a couple of statues without noticing them but not 700!

The two sibling pagodas were both built about 100 years after Qianxun and are each about 43 metres (140 ft.) tall. Unlike their big brother, their architectural style resembles that of the Song Dynasty (960-1279), as they are octagonal in shape and are ten storeys high. Behind the three pagodas, the Juying or “Reflection” Pond mirrors the image of the snow white towers jutting out amongst the mountains. For reasons unknown, one of the smaller pagodas leans slightly to the side and is reminiscent of Italy’s Tower of Pisa. If you fancy getting a fun snapshot of your trip, you can try “holding up” this pagoda in a photograph. You’ll end up with an interesting souvenir, but the other tourists might think you’ve gone a little crazy!

Chongsheng Temple, the pagodas’ mother building, was a Buddhist temple that acted as the royal temple of the Dali Kingdom (937-1253), which ruled the old Nanzhao Empire during both the Tang and Song dynasties. It was originally built around the same time as Qianxun Pagoda but was tragically destroyed during the Qing Dynasty (1644-1912) and had to be rebuilt in 2005. It is now a massive complex that winds its way up the Cangshan Mountains. If hiking isn’t your thing, on the nearby Marble Street you’ll find stalls where you can purchase locally made craftworks, marble carvings or brick-paintings.

Nowadays, tourists can visit both the temple and pagodas at almost any time. During the day, the pagodas rise up through the mist and stand tall, protecting the region from amorous dragons. At night, they are beautifully illuminated and appear almost ethereal, like towers from long forgotten fairy tales. If you’re taking a trip to Dali, set aside a few hours to make the trip and marvel at one of the last vestiges of the ancient Nanzhao and Dali kingdoms.