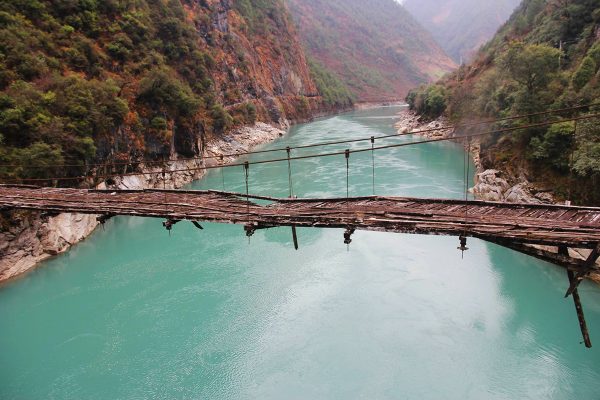 Taking up only 0.4% of the country’s area yet somehow managing to support 20% of its plant species and 25% of its animal species, the protected areas around the Three Parallel Rivers are some of the most bio-diverse in the world. Altogether 15 protected areas along the three rivers were made into a World Heritage Site by UNESCO in 2003 because of their biodiversity and phenomenal landforms. The site represents the point where the Yangtze (Jinsha), Mekong (Lancang) and Salween (Nujiang) rivers run parallel for over 300 kilometres. This is rather miraculous in of itself, considering these are the 3rd, 12th and 25th longest rivers in the world respectively and, while the Yangtze eventually flows into the East China Sea at Shanghai, miles away the Mekong empties into the South China Sea at the city of Ho Chi Minh in Vietnam and still further the Salween flows into the Indian Ocean at Moulmein in Burma.

Some of the gorges in these areas boast a depth of over 3,000 metres (9,800 ft.), making them twice as deep as the Grand Canyon! At the bottom of the gorges the climate is sub-tropical, whilst along the top there are mountain ranges sporting over 100 snow-covered mountains that are higher than 5,000 metres (over 16, 400 ft.). With all these different temperature zones, you can see how this area has come to support so many plant and animal species. The protected areas are inhabited by a phenomenal 6,000 species of plants, 173 species of mammals, and 417 species of birds, including red pandas, snow leopards, Lady Amherst’s pheasants, Asiatic wild dogs, and the incredibly rare Gaoligong Pika. The animal species found here are a wonderful mixture of the wildly beautiful and the painfully cute!

Of the many snow-capped mountains littered through the Three Parallel Rivers National Park, the Meili Snow Mountain is considered the most famous. Its tallest peak, Kawagarbo, looms over the surrounding countryside at an elevation of over 6,500 metres (22,100 ft.) and the whole range itself is considered sacred by the local Tibetan monks. As of 2001, it is illegal to climb the mountain as its status as a religious site means it would be sacrilegious to set foot on it. So be sure not to climb it or you’ll be arrest for high treason! If you travel to the town of Shenping in Yunnan, you’ll be rewarded with a stunning view of the mountain range and may even see a few of the Tibetan pilgrims completing their circuit of it on foot.

The Meili Snow Mounta in is part of the eight geographical clusters that make up the national park and each one offers something new to its visitors. The Gaoligong Mountain Area is the most extensive and, as such, features cavernous gorges, dizzying cliffs, bubbling streams, thundering waterfalls, primeval evergreen forests, and settlements of the 25 ethnic minorities that call the area home.

The Yunling Mountain Area is home to the most diverse community of animal species, including the elusive Yunnan golden monkeys that can be found nowhere else on earth. And the Haba Snow Mountain Area boasts a modern oceanic glacier, an Indian azalea forest, alpine lakes, snow-capped mountains, and lava formations. Each of these clusters feels like an ethereal paradise and, with all of these choices on offer, you may never find your way out of the mountains!

From the luxuriant forests to the reddish sandstone Danxia landforms and the verdant alpine meadows, the protected areas of the Three Parallel Rivers represent a visual feast that should not be missed. You can access parts of the national park from the cities of Dali, Lijiang or Shangri-la in Yunnan. Most of the treks can take upwards of a week or more, so say goodbye to your creature comforts and prepare to get a little wild!