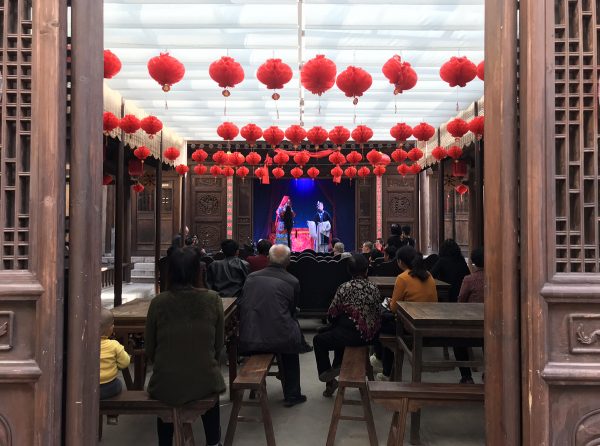 Long before recorded time, it was believed that the universe consisted solely of formless chaos. Over 18,000 years, this chaos formed into a cosmic egg, which housed a sleeping giant named Pangu. When he awoke, Pangu set about creating the world. First, he separated Yin from Yang with a swing of his giant axe, creating the Earth and the Sky. In order to keep them apart, he stood upon the Earth and held up the Sky for over 18,000 years, until he tragically died. On his death, his breath became the wind, mist, and clouds; his voice became the thunder; his left eye, the sun; his right eye, the moon; his head formed the mountains; his blood flowed into rivers; and his muscles became fertile land. In short, every part of Pangu’s body formed an integral part of the world we live in, including several of the deities that are still worshipped in Chinese folklore today.

He is the focal figure of the Chinese creation myth and, from his death, a powerful being named Huaxu was born. Huaxu gave birth to two central figures in Chinese mythology: Fuxi and Nüwa. They supposedly had the faces of humans and the bodies of snakes, although they are often regarded as the first human beings. So, next time someone accuses you of being as sneaky as a snake, just say it’s in your DNA! According to legend, Fuxi was born sometime during the 29th century BC in the town of Chengji, which is usually identified as modern-day Tianshui. He ended up marrying his sister Nüwa and together they used clay to create the first human beings on earth. He then taught mankind how to hunt, fish, domesticate animals, and cook, and is even credited with developing the first Chinese writing system and establishing the institution of marriage. Not too shabby for a guy who had to slither around on his belly all day!

He is heralded as one of the Three Sovereigns, which were god-kings or demi-gods who used their powers to improve the progress of mankind. During the Ming Dynasty (1368-1644), the Fuxi Temple was erected in Tianshui to honour this mythical ancestor and nowadays throngs of visitors still flock to the temple every year, particularly during the annual Tianshui Fuxi Culture and Tourism Festival in June. So, while many cities in China boast beautiful natural surroundings or stunning architecture, very few of them can claim to be the birthplace of a god!

Yet the city’s illustrious history doesn’t end there. Archaeological evidence suggests that the area was settled by humans as early as the Neolithic Period (c. 8500-2100 BC), making it one of the cradles of ancient Chinese civilisation. The famous Dadiwan Site in Zhangshaodian Village can be found just northeast of the city and consists of over 200 primitive houses that date back approximately 4,800 to 7,800 years ago. It is one of the most well-preserved Neolithic sites in the country and some of the houses’ even contain prehistoric paintings of humans and animals!

The name “Tianshui” literally means “Water from the Heavens” and it was a fantastical local legend that lent the area its unusual epithet. According to this legend, sometime during the Han Dynasty (206 BC– 220 AD) the region suffered from a long drought and was racked by warfare. Suddenly a colossal storm struck, with gale force winds, heavy rain, lightning and thunder only adding to the locals’ troubles. This storm was so powerful that it split the sky itself and water poured down from the heavenly realm, creating the Tianshui Lake. So, out of great tragedy and suffering, came great beauty. That being said, the city wouldn’t formally be given the name until 1950, so don’t go there with the intention of drinking some holy tap water! 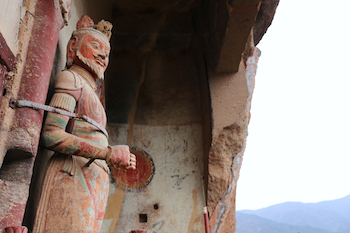 Its auspicious position meant that, during the Han Dynasty, it swiftly became one of the major trading hubs along the ancient Silk Road. Like many of the oases towns along the Silk Road, Buddhism made its way to Tianshui around about the 5th century and wonderful works of Buddhist art and architecture soon followed, including the nearby Maijishan Grottoes. Resting just 40 kilometres (25 miles) southeast of the city proper, this cave complex is renowned as one of the Four Grand Groups of Grottoes and represents 194 caves filled with over 7,200 Buddhist sculptures and 1,000 square metres (10,700 sq. ft.) of intricate murals. This colossal endeavour was begun sometime during the Northern Liang Dynasty (397–460) and continued for over 1,000 years. Even at the grand old age of over 1,500, the Maijishan Grottoes have yet to retire and still welcome visitors on a daily basis!

Another equally magnificent yet less well-known grotto complex can be found in the valleys of the Zhonglou Mountains just northeast of Tianshui. Amongst verdant hills, flowery meadows, and bubbling brooks you’ll find the secluded Water Curtain Cave Complex, which hides a sequence of five grottoes known as the Water Curtain Cave, Thousand Buddha Cave, Lashao Temple, Xiansheng Pond, and Sanqing Cave. These were once an important pilgrimage site along the Silk Road and date all the way back to the Jin Dynasty (265-420). During the rainy season, water cascades from the top of the mountain and covers the mouth of the cave like a curtain, earning the grotto complex its unusual name. Filled with gorgeous murals and resplendent with natural beauty, a trip to these caves is sure not to dampen your spirits!

Join a travel with us to explore more about Tianshui: Explore the Silk Road in China