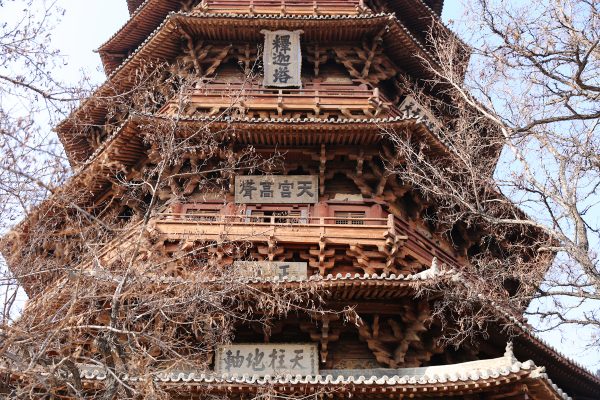 The Yingxian Wooden Tower, also known as the Shakyamuni[1] Pagoda of Fogong Temple, rests just 85 kilometres (53 mi) south of Datong City in western Yingxian County. Having been built without a single nail or rivet, it is a masterpiece of carpentry and the oldest surviving wooden pagoda in the world. It has reached such a level of fame in China that it is now widely referred to simply as “Muta” (木塔) or “Wooden Tower”. At the grand old age of 959, this tower has pushed its woody competitors to the side and taught them to respect their elders!

The tower was originally built in 1056 by Emperor Daozong of the Liao Dynasty (907–1125), which controlled an empire encompassing Mongolia, northern Korea, and northern China, and was established by a nomadic subgroup of Mongolian people know as the Khitans. Emperor Daozong was a devout Buddhist and his father, the preceding Emperor Xingzong, was a native of Yingxian County. This would perhaps explain the isolated location of the tower, as pagodas such as these were normally erected to symbolise the death of Buddha and its placement may have been Emperor Daozong’s way of equating the importance of Buddha’s death with that of his father.

The tower was placed at the centre of Fogong Temple, which was known as Baogong Temple until its name was changed during the Yuan Dynasty (1271-1368). According to local historical documents, from the years 1056 to 1103 it withstood a total of seven earthquakes and, right up until the 20th century, it required only ten minor repairs. Talk about resilient! Unfortunately, it sustained major damage during the Second Sino-Japanese War (1937-1945) but, when it underwent the necessary repairs in 1974, renovators uncovered over 50 block-printed and handwritten scrolls of Buddhist sutras[2] dating back to the Liao Dynasty. These scrolls helped historians to finally establish that the use of moveable type printing had indeed spread widely across China after being developed by the Song Dynasty (960-1279). So it seems every cloud really does have a silver lining! 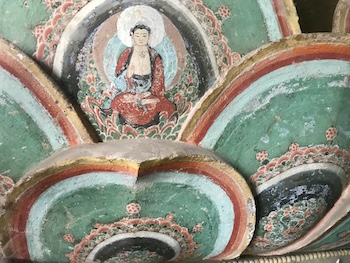 Although the archway, bell tower, drum tower, and shrine to Shakyamuni Buddha were all rebuilt during the Qing Dynasty (1644-1912), the wooden tower itself is in its original condition and has been stunningly well-preserved. It stands on a 4 metre (13 ft.) high stone platform that is delicately decorated with crawling lion sculptures in the Liao Dynasty style, and it towers in at a height of over 67 metres (220 ft.). Looking at it from the outside, it appears to have only five storeys, but walk inside and you’ll soon realise that there are in fact nine storeys in total. Just when you thought you were going to have a relaxing climb to the top!

An 11-metre-high (36 ft.) statue of Shakyamuni Buddha takes pole position at the centre of the first floor, with an ornate caisson[3] directly above its head. Similar caissons bedeck the ceilings of every storey in the pagoda and its walls are beautifully decorated with vibrant murals and vivid sculptures that all reflect the Liao Dynasty style. There are windows on all eight sides of its top floor that provide stunning views of the surrounding countryside and supposedly, on a clear day, the tower itself can be seen from up to 30 kilometres (19 mi) away!

[1] Shakyamuni: One of the titles of Gautama Buddha, the central figure and founder of the Buddhist faith. It is derived from the place named Sakya, which is where he was born.

[3] Caisson: Also known as a caisson ceiling or zaojing, it is a feature of East Asian architecture commonly seen on the ceilings of temples or palaces, usually at the centre or directly above an object of importance, such as a throne or statue. Generally speaking, it is a sunken square, octagonal, hexagonal, or circular panel set into a flat ceiling that has been richly carved and decorated.