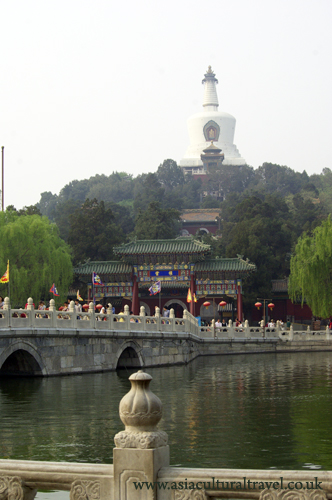 Located in the centre of Beijing, Beihai Park is adjacent to the Forbidden City in the west, and to Coal Hill Park in the east. It connects the Central Lake and the South Lake, and borders Shichahai Lake in the north. Beihai Park has the longest history among the Chinese imperial parks. Its history also ties in with the history of Beijing’s development as a city.

In 938, under its original name “White Lotus Pool”, Beihai Park though it was not an official palace, was occupied by its first imperial resident, Emperor Tai of the Liao Dynasty (907-1125). During this time it was renamed Yaoyu Palace. After the Liao Dynasty ended, the Jin Dynasty (1115-1234) took over and chose Beijing (named Zhongdu then) as its capital, extending and expanding the whole city in the process. Yaoyu Palace was also renovated and the Hall of Jade was added.

From 1163 to 1179 the emperor Shizong of the Jin dynasty used the clay from the lake to make a small island in the centre of the lake, which he named Jade Island (Qionghua Island). With the centre of Jade Island, he extended the palace and renamed it Daning Palace. The Palace in the Moon (Daning Palace) was built on top of this island. During the Yuan Dynasty (1271-1368), the whole palace area was repaired three times. The Palace in the Moon was extended and made into a large, luxury palace, and this was where Kublai Khan (one of the emperors of the Yuan Dynasty) used to live. Many other buildings were also built on top of the hill (named Longevity Hill then) on Jade Island. Unfortunately, this fabulous palace collapsed in 1579, during the Ming Dynasty. Now the Temple of Eternal Peace sits on the former site of this palace. During the Ming Dynasty even more restoration and construction was done in Beihai Park. The Five Dragon Pavilions and galleries were built during that period. However, the whole palace was badly damaged during the war, towards the end of the Ming Dynasty. 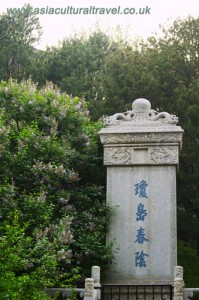 The Emperor Qianlong of the Qing dynasty (1644-1911) revelled in building gardens. So for 44 years, from 1742 right through till 1786, he oversaw the construction of a monumental project. The project included 126 halls, numerous arches over gateways and temples, 35 pavilions, 25 bridges, 16 stone tablets, and renovations and reconstructions of 12 existing buildings on the shore of the lake. Then came the arrival of one of the most famous women in Chinese history – the queen dowager Cixi. She took a lot of money that was supposed to be allocated to the army and used it to renovate the palace. She even built a 1,510.4 metre long railway, which started at the Tower of Vermilion Light (in the Middle Sea) and ended at the Clear Mirror Study (the Heart – Ease Study) in Beihai Park. During the Qing Dynasty, Beihai Park was regarded as a place of recreation for the imperial family, and was known thereafter as the Winter Palace. 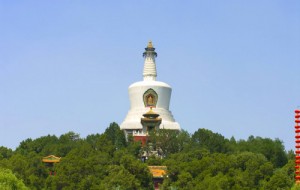 At the top of Jade Island sits the White Dagoba, which is a Tantric Buddhist monument built in honour of the Dalai Lama. The Emperor Shunzhi of the Qing Dynasty adopted a Tibetan Lama priest named Momhan, and it was Momhan who persuaded him to build the White Dagoba and also the White Temple in 1651. In 1743, when Qianlong was the emperor, the White Temple was renamed the Temple of Eternal Peace.

The White Dagoba is 35.9 metres tall, and was built using bricks and stones that were whitened in lime. There is purposefully no entrance to the White Dagoba. It is said that a red emblem on the surface of the building marks the opening, which was sealed after some sacred articles were stored inside. It is also said that there is a small box painted with a symbol of Taiji hidden inside the dagoba, and it is rumoured that this box contains two Buddhist relics.

The Dagoba rests on a square base constructed from huge stone slabs, and it is topped with two bronze parasols. 16 bronze bells hang around these parasols, and each of them weighs about 8 kilogrammes.

What is the difference between a dagoba and a pagoda?

A dagoba is a multi-storeyed Buddhist temple or sacred paramedic tower, which usually has an odd number of storeys and which is usually built over a sacred relic or as a work of devotion. A pagoda, on the other hand, is a single rounded structure crowned by a golden spire.

The Round City was built during the Jin Dynasty (1115-1234), and was famous for being a city within the city. It stands at the south gate of Beihai Park. It is surrounded by a 4.6-metre-high circular wall and has a distinctive courtyard with halls, pavilions and ancient trees. It was originally an islet in the Pool of Great Secretion (Taiyechi). It was formed from the lake excavations and served as an imperial garden. There are two gates leading into the Round City – the Clear View Gate (Zhaojingmen) to the east and the Extended Auspiciousness Gate (Yanxiangmen) to the west.

Other important attractions in Beijing Park include: