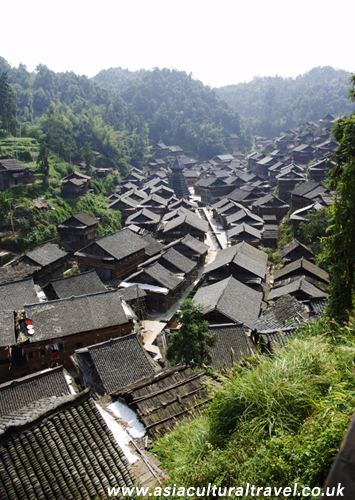 With a population of nearly 3 million people, the Dong ethnic minority is one of many thriving, culturally diverse communities found in China. The greatest concentration of Dong people live in Guizhou province, in the southeast of China. There are many Dong villages in Liping, Rongjiang and Congjiang County that have survived for hundreds of years and the locals in these villages have enjoyed a lifestyle that has remained largely unchanged since the villages were established. Dong villages characteristically have wooden houses supported by stilts. The Dong ethnic minority is famed in particular for its Wind-Rain bridges, Drum Towers and rich history of folk singing. In every Dong village, there will be at least one Drum Tower, one Wind-Rain Bridge and one Kam Grand Choir.

When visiting any of these regions, you need to ask for permission before you enter any of the Dong villages, out of respect for their local customs. If you notice a thatch design or a rope hanging from the village gate, this means a religious festival is taking place and normally only residents will be allowed admittance into the village. There are numerous Dong villages in Guizhou, such as Sanbao village and Yintan village, which all have their own unique properties and customs. To give you a better idea of what life in a Dong village is like, we’ve dedicated two articles to the villages of Zhaoxing and Xiaohuang, which are both different but magnificent in their own way.

No matter where you go in Guizhou, you’re bound to encounter some aspect of the vibrant and fascinating Dong culture. Xiaohuang and Zhaoxing are just two examples of a rich treasure trove of villages that are just waiting to be discovered in the lush, mountainous countryside of Guizhou. Whether you want to revel in the haunting melodies of the Kam Grand Choirs or bask in the shade of a colossal Drum Tower, southeast Guizhou is the perfect place to immerse yourself in the life of the Dong people.

Discover more about Dong Culture in Dong villages on our travel: Explore the culture of Ethnic minorities in Southeast Guizhou