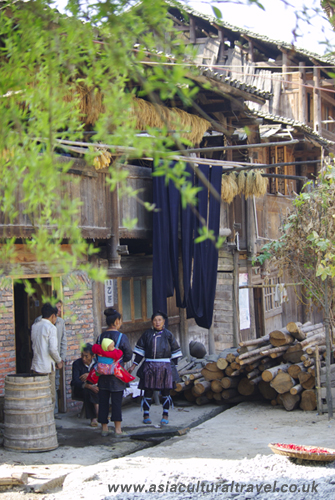 Xiaohuang is located about 22 kilometres away from Congjiang County. However, about 14 kilometres of the road is a sandy, zigzag path through the mountains, so the bus from Congjiang to Xiaohuang can take about an hour. Over 3,000 people live in this village and, as the village is pretty isolated from the outside world, the locals have become relatively self-sufficient. To this end, everyone in the village is proficient at farming, hunting and weaving cloth.

Xiaohuang is often referred to as the Village of Songs because the Dong people in this village are particularly accomplished at performing polyphonic folk songs known as “Dage” or Grand Songs. In 1996 the Ministry of Culture of the People’s Republic of China bestowed the title “the Village of China Folk Art” on Xiaohuang because of its preservation of the Dong singing tradition. Over one third of the population of Xiaohuang is made up of professional folk singers. While some folk songs are accompanied by the pipa[1], most are sung without any musical accompaniment.

From dusk till dawn, you will always be greeted by the harmonious sound of singing throughout Xiaohuang. The Dong ethnic minority have no written language, so they use folk songs to narrate their daily life, express their feelings and keep a record of their history. All of Dong culture is preserved in these magnificent folk songs. The more songs a Dong person knows, the better educated they are considered to be. Singing is so important to the Dong people that supposedly, in the past, if a man couldn’t sing then he would struggle to find a wife.

From an early age, children in the village are encouraged to love singing and hold on to this passion well into their old age. Children from the age of five will be trained by one of the accomplished local singers free of charge and these singing teachers are greatly revered in the village. The villagers are separated into different choirs depending on their age and gender. Every choir is distinguished by their particular style of singing and the topics of their songs. For example, choirs of young children will sound sweet and lively, while choirs of young girls sound innocent and full of passion, and choirs of men have a depth to their voices that sounds haunting and powerful. Female choirs incorporate sopranos, mezzo-sopranos and contraltos and male choirs incorporate countertenors, tenors, baritones and bass’. 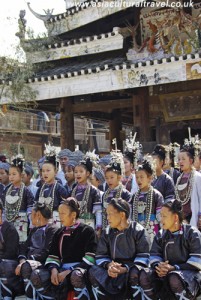 The most talented singers in any Dong village make up what are called Kam Grand Choirs. The Kam Grand Choir tradition is thought to date back all the way to the Warring States Period (475BC-221 B.C.), with a history of over 2,500 years behind it. In 2009, it was made a World Class Intangible Cultural Heritage by UNESCO. A Kam Grand Choir is a polyphonic choir that sings without the help of a conductor or any accompanying orchestra. Most songs performed by these choirs consist of a prelude, a main body made up of several sections and an ending. These songs are designed to imitate the natural world, such as the chirping of insects, the gurgling of streams, the whistling of the wind and other soothing natural sounds. The singing is designed to spur the soul and originate from the heart. The solo singing will be done by the sopranos and the bass section is sung by the rest of the choir. The soprano section will be performed by between one and three sopranos, depending on the style of song.

There are Male Choirs, Female Choirs and Child Choirs, and each of these is further separated into four main categories based on their styles, melodies and the content of their songs. In the Dong dialect, these four categories are called Gating, Gama, Gaxiang and Gaji. Gating or “Choirs of Sound” perform songs that are characterised by an undulating melody and short lyrics, employing the use of several sopranos. This style of song is dedicated almost entirely to imitating the sounds of the natural world. The famous Cicada Song is a fine example of a Gating-style song. Gama or “Romance Choirs” perform songs revolving around the theme of love and employ slow rhythms and soft voices to heighten their effect. 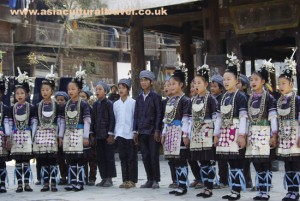 Gaxiang or “Morality Choirs” perform songs that are designed to educate, advise or console the Dong people by praising virtues and condemning inappropriate behaviour. These songs have an even tune in order to draw focus to their lyrics. Finally, Gaji or “Narrative Choirs” perform songs that focus on dialogue and plot, and are characterised by slow, melancholy or soothing tunes. The Gaji songs are some of the hardest to perform, as they require the performers to remember lengthy lyrics, complicated plots and various key facial expressions. Usually these songs will be led by only one soprano.

If you want to experience the majesty of a performance by a Kam Grand Choir in Xiaohuang, you will have to book it in advance. The scale of the orchestra will vary depending on how many tourists have booked a place and how much they have paid. However, if you come during any of the Chinese public holidays, you’ll be treated to a free performance by the villagers. The best time to come is on National Day public holidays, which is around 1st of October every year. Unfortunately, during these public holidays Dong villages like Xiaohuang can become crowded. 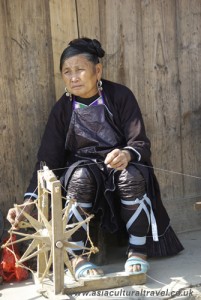 If you want to avoid the crowds, we recommend that you visit during the Dong New Year festival, which is normally sometime between late October and early November every year according to the Chinese lunar calendar. During the New Year celebrations, the surrounding Dong villages will hold a singing competition that is truly magnificent to behold. A similar competition organised by the government is now also held during Spring Festival (Chinese New Year) and occasionally a singing competition will also be held on August 16th(Chinese lunar calendar). If you’re taking a tour of the Dong villages, we strongly recommend visiting Xiaohuang and experiencing first-hand a village that is forever immersed in song.

Join our travel to enjoy the fantastic Dong Kam Grand Choirs in xiaohuang Village: Explore the culture of Ethnic minorities in Southeast Guizhou