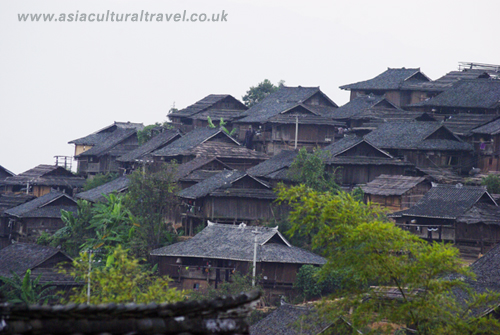 Basha is a village unlike any other in China. It is home to members of the Miao ethnic minority but it is unique amongst all other Miao communities. This is because it is the only place in China where residents are still legally allowed to own and carry guns. When the Chinese government tried to confiscate the guns from the members of Basha village, they refused and it was decided that they should be allowed to keep their rifles as part of their rich cultural heritage. To this day, visitors are welcomed with a thrilling display of expert shooting by the local men.

Basha Village is about 7 kilometres away from Congjiang County Town in southeast Guizhou. According to local legend, the village was established over 2,000 years ago when their ancestors emigrated from Central China to the remote, mountainous regions of Guizhou. These ancestors were frontline troops who used rifles to defend the village from outsiders and occasionally from wild animals, such as bears. This is why gun ownership has become such an important part of their culture. 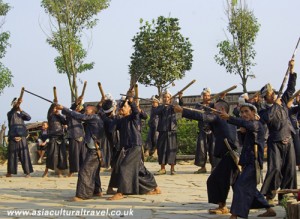 As you enter Basha Village, you’ll notice a board with the words “China’s First Village of Tribe Culture” inscribed upon it. Do not be alarmed if you are greeted with men brandishing their rifles! This is part of their traditional welcoming ceremony and they have no intention of harming you. If you’re lucky, you may even get to see them fire their cannon. The village itself is home to about 1,000 residents and has over 400 separate households. The villagers still live in traditional Miao dwellings known as Diaojiaolou, which are wooden houses held up by stilts. They are normally two-storeys high, with the front of the house supported by pillars and the rear directly affixed to the mountain using wooden stakes. There are also wooden structures called “rafts” scattered throughout the village that are used to dry un-husked rice.

Due to their cautious nature, the villagers have virtually isolated themselves from the outside world. They are almost completely self-sufficient and still maintain practices and customs that date back hundreds of years. Their traditional dress dates back all the way to the Ming (1368-1644) and Qing (1644-1911) dynasties, as does the men’s unique hairstyle. All of their clothes are made from hessian or “gunny cloth”. Local women spin natural fibres or “gunny threads”, and then cut them into shorter segments, which are neatened and used to weave the cloth. The cloth is dyed using a mixture made from a local plant and egg whites. It is the local plant that gives the clothes their distinct, bluish-purple colour and the egg whites that make the fabric waterproof and shiny. 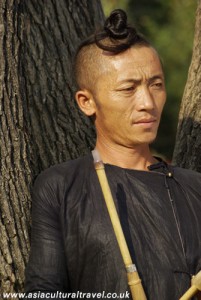 Some of the villagers do not wear shoes, even in the freezing cold winter. The local men wear collarless coats with buttons on the left hand side or down the front, and short, baggy trousers. If you look closely, you’ll notice that the men will have little, embroidered “tails” attached to their coats. These “tails” are actually gifts from local girls and each one symbolises that the man has won the heart of a girl. The more “tails” a Basha man has, the more popular he is with the women in the village. Each man will also carry a claymore (a type of sword) at their waist and a hunting rifle on their shoulder.

The men of this village sport a hairstyle that is completely unique to Basha. Rather than having their hair cut, boys will grow their hair long, like the girls. Sometime between the age of seven and fifteen, each boy will have a coming of age ceremony where they are given the choice to retain their long hair or have it shaved. During the shaving ceremony, the tribe leader will wet a sickle and then delicately shave off all of the boy’s hair except for the hair at the centre, which will be coiled into a bun. This is done without any kind of shaving cream or other shaving tools. If the young man decides to keep his hair, it will be kept long and coiled into a bun on top of his head. Local men believe that their hair bun is a symbol of their masculinity and power. When the boys are fifteen years of age, they will be given their own rifle as a sign that they are now adults.

The women’s clothing in Basha is much more elaborate. Like the men, they also wear a coat that is buttoned down the front, but instead of trousers they wear a kilt and adorn their attire with colourful wraps, leg wrappings and wristbands. Their clothes are all beautifully embroidered and incredibly colourful. Sometimes young girls will also wear silver ornaments on their chest. The Miao people in Basha are categorised as part of the “Short Miao” subgroup. The Miao ethnic minority are generally subdivided into two subgroups based on the length of the women’s skirts, hence the term “Short Miao” to denote the shorter skirts. These subgroups differ culturally and adhere to a different set of customs. 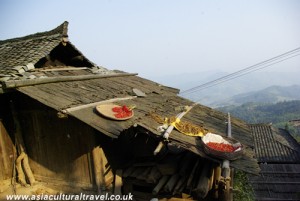 The local religion in Basha involves worshipping trees and the villagers have a particular reverence for the maple tree. They believe that the buns on their heads represent trees and their bluish purple clothes represent tree bark. When a baby is born in Basha, they plant a tree for them and oftentimes this tree will be cut down and used to make that person’s coffin when they die. The ancient trees in Basha are the most revered and it is forbidden to cut them down or damage them in any way. On important occasions and during traditional festivals, the villagers will burn incense under these ancient trees and pray for health and happiness.

Normally each big tree will have a swing hanging from it that is strong enough to carry two people. They are used by the village children to play on but traditionally their main role is in courtship. On the 7th of July every year, according to the Chinese lunar calendar, the villagers will hold the Swing Festival. For three days, young people of both genders will play on the large swings. If a boy notices a girl that he likes, he will jump on the swing with her and then step on her feet to show that he loves her. If his love is requited, then the girl will step on his feet before continuing to play on the swing. If the love is unrequited, then the girl will simply continue playing on the swing and the boy will have to try his luck somewhere else. 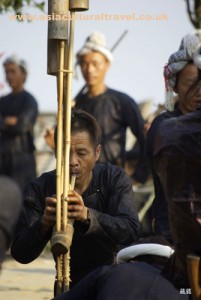 Other festivals in Basha are celebrated using the lusheng[1], a traditional wind instrument of the Miao people. When the Basha villagers are worshipping the God of the Sun, they will face the sun with their lusheng, take seven steps back and then begin playing. Most of the festivals take place in the Lusheng Hall near the village. The “hall” is actually a round piece of flat ground surrounded by ancient trees. According to locals, this place is sacred and was formed naturally, with no outside influence. During festivals, the locals will perform what is called the Lusheng Cai Tang, which is when the men, and sometimes the women, vigorously play the lusheng. Sometimes they will even dance while playing the lusheng. Lusheng Hall is usually open to the public.

With all of this excitement on offer, it’s no wonder that Basha has developed such a fine reputation. Its people and their customs have remained largely unchanged for thousands of years, and are still as fascinating and mysterious as ever. It truly is the perfect place to experience the diversity of Miao culture in China.

Join our travel to enjoy the amazing Miao performance in Basha Village: Explore the culture of Ethnic minorities in Southeast Guizhou

One Reply to “Basha Village”