As you walk through the streets of Xi’an, you’ll be bombarded with the cries of vendors selling their unique variations on local snacks. In some cases, these local snacks are held in as high esteem as the signature dishes of the province. From the sweet to the savoury, from the large to the small, snacks play a very important role in Chinese culture. So if you want a real taste of China, you need to get stuck in and try a few of the local delicacies that you won’t find in any restaurant. Thanks to its Muslim community, Shaanxi boasts a wide variety of snacks that span a myriad of cooking styles. We’ve listed a few here to whet your appetite and showcase the grandeur of Shaanxi’s local nibbles. 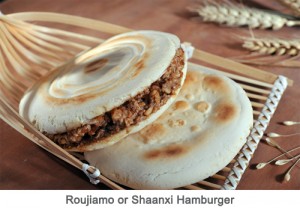 The Shaanxi Hamburger earned its unusual name thanks to its suspicious similarity to its Western cousin. That being said, the two are entirely unrelated. The way roujiamo is made varies from vendor to vendor and region to region, with some vendors using mutton, some using beef, some using pork, and all of them using a different mixture of seasonings to make their roujiamo stand out from the crowd. The “mo” part of the name refers to a type of flatbread in China made from wheat flour that makes up the bun part of the hamburger. This type of bread dates all the way back to the Qin Dynasty (221-206 B.C.) and was originally baked in a clay or mud oven, although now it is often made in a frying pan or pressure cooker. The fluffiest, tastiest “mo” are made using the original method. The recipe for the meat used in roujiamo dates all the way back to the Zhou Dynasty (1045-256 B.C.) and usually consists of finely chopped meat, coriander and chillies, although recipes will vary from vendor to vendor. This tantalising snack is soft, moist and wonderfully flavoursome. 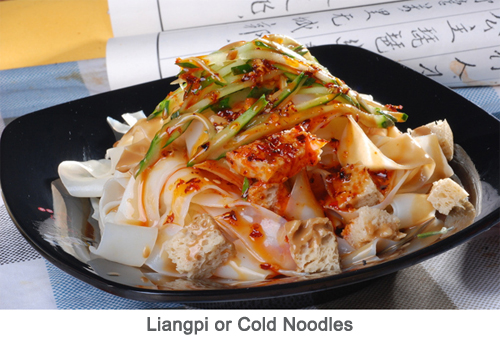 Liangpi are traditionally seen as one of the most popular snacks in Shaanxi. Liangpi are not actually noodles, but are often referred to as noodles due to the resemblance in shape and texture. Although liangpi are served cold, this dish is served throughout the year. Liangpi can either be made from rice flour (mianpi) or wheat flour (ganmianpi). The types of liangpi can be further subdivided into Hanzhong Liangpi, Majiang Liangpi and Shan Xin Gan Mianpi. Hanzhong Liangpi originated from the city of Hanzhong in southwest Shaanxi. These liangpi are steamed and seasoned with garlic and hot chilli oil. Majiang Liangpi are typically garnished with julienned cucumber and a sauce made from salt, vinegar, hot chilli oil and black sesame paste. Shan Xin Gan Mianpi are made from a different type of liangpi altogether, which looks darker in colour and has a firmer texture. These liangpi are always served with vinegar, chilli oil, salt, mashed garlic and bean sprouts. Whatever variety of liangpi you fancy, we’re sure that you’ll find this snack both delectable and refreshing! 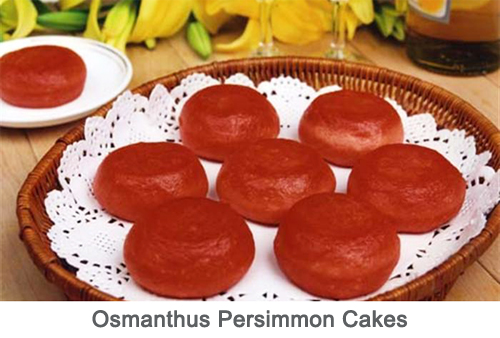 These “cakes” are not cakes in the traditional sense of the word and actually resemble donuts in appearance, although they taste vastly different. Osmanthus Persimmon Cakes are made from the local persimmons grown in the Lintong District, which have earned the name “fire-crystal persimmons” due to their vibrant colour. A mixture of local persimmons and wheat flour is used to form a casing around the soft filling, which is made from osmanthus flowers, rose-petals, walnuts and sugar. The casing is moulded into a circular shape around the filling and is then fried in hot oil until the skin is slightly browned. The ingredients used to make the filling will vary from vendor to vendor. This snack was created by the Uyghur ethnic minority and is particularly popular in the Muslim quarter of Xi’an. These soft, crispy persimmon cakes are exotic to look at and comforting to eat.