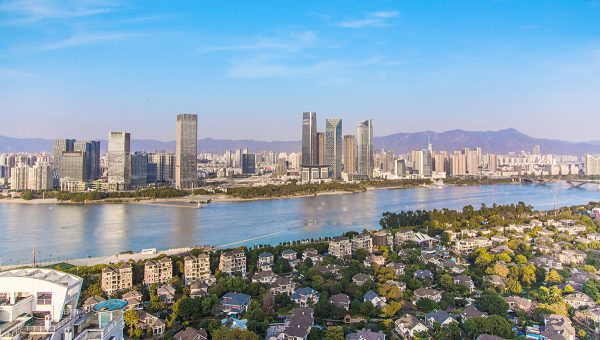 The Black and White Pagoda and several of the other monasteries and temples in Fuzhou date back as far as the Song Dynasty (960-1279). Even the banyan trees on Fuzhou’s streets are nearly 1,000 years old.

During the Song Dynasty, Fuzhou enjoyed its period of greatest prosperity due to foreign trade, and it quickly became an economically flourishing port. However, during the 14th century, the Ming Dynasty (1368-1644) severely limited foreign trade in southern China and this caused an economic downturn in Fuzhou. Four centuries thereafter, because of the Opium War, Fuzhou was forced to open again as an international port for European merchants.

In the center of the city, surrounded by modern skyscrapers, the Sanfang-Qixiang district still houses about 150 ancient dwellings, which cover a surface area of about 100 acres. These ancient buildings are inhabited by old residents of Fuzhou and some of them also act as sites of cultural interest, selling things such as traditional Fuzhou-style snacks and craftworks.

Sanfang-Qixiang’s history dates back to the late Western Jin Dynasty (266-316). However, the surviving houses in the district were mainly built during the Ming (1368-1644) and Qing (1644-1911) Dynasties. There are several mansions there that once belonged to famous historical figures, such as Lin Zexu, who was an official during the Qing Dynasty and who was praised for his forceful opposition to the opium trade.