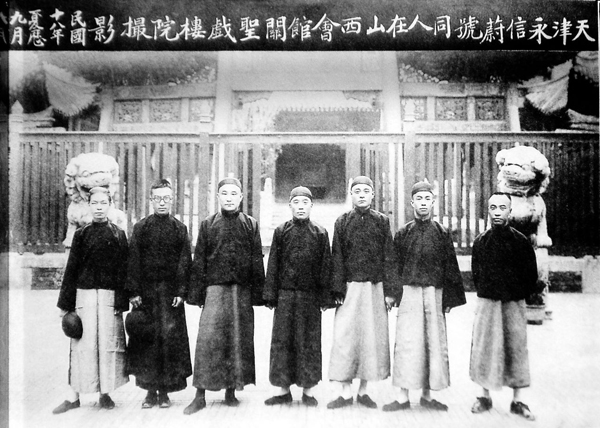 At the beginning of the Ming Dynasty, the Han imperial court built military defences along the Great Wall to guard against the Mongolian army. The biggest problem for those large garrisons was supplying them with sufficient food. So the imperial court commissioned a division of the police force, named Kaizhongfa, whose primary responsibility was to supervise the salt trade. The Kaizhongfa then allowed merchants to do business in salt in certain areas if they, in exchange, sent food to the frontier.  In the south of Shanxi, there used to be a large salt mine. However, the fields in Shanxi were too barren to support a successful agricultural industry. In order to fulfil the agreement with the imperial court, the salt merchants from Shanxi had to purchase food from their neighbouring provinces, Henan Province and Shandong Province. This was the first step taken by the Jin merchants’, which eventually led to their future success.

When the Qing Dynasty began, the astute Emperor Shunzhi (1638-1661) bestowed his honour onto the Jin merchants. He added some of the Jin merchants to the ‘imperial merchants’ list. The Jin merchants improved their social position and the salt market was flourishing then, so they decided to make a contribution to this new imperial court. During the reign of the Emperor Yongzheng (1678-1735), the Qinghai Rebellion broke out outside of the Great Wall. The battle was far away and thus caused the same problems as before with regards to supplying food to the battlements. A Jin merchant named Fan Yubin volunteered to take on the mission. However, once he had transported the supplies to the frontier, all of it was stolen by the rebel army. Fan Yubin spent almost all of his earnings re-purchasing the stolen goods and sending them to the frontier once again. His actions were greatly appreciated by the Emperor Yongzheng. Thus Yongzheng gave Fan Yubin the privilege to do business in the Mongolian area.

In 1727, the Qing imperial court signed the “Treaty of Kyakhta”1 with the Russian Empire, which meant that Kyakhta was opened up as an international business market between China and Russia. Tea was the most popular product among the Russian purchasing agents, and the business generated by their custom helped the Jin merchants and led to their most prosperous era. From then on, the Jin merchants were able to open up a much larger market and the merchant cartel grew stronger and stronger. The merchant trade attracted more and more people, thus allowing it to grow stronger and stronger

There is a famous Shanxi folk tale named “Westbound”, which indicates in its story that it was common for Shanxi people to find a way to survive in western areas. Shanxi is a long way away from Mongolia. In fact, many people died on the way to Mongolia because of the bandits, the cold and even from starvation. 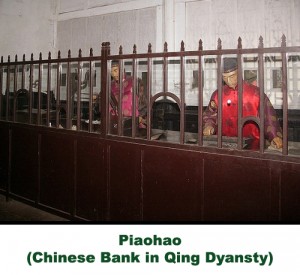 With the merchants’ business developing and prospering, the demand for silver rose higher and higher, as silver was the main form of trade currency at the time. It was dangerous to transport large amounts of silver as part of a merchant convoy. Thanks to these merchant convoys, bandits and other criminal gangs were rife and made an enviable living off of their stolen spoils during those days. In 1820, the first ‘Chinese bank’ was set up in Pingyao, Shanxi, and was called Rishengchang. This solved the issues merchants had once had with transporting silver, as clients could now bring postal orders from the bank on their business trips rather than large amounts of silver.

The appearance of this early form of “bank”, named “Piaohao” in Chinese, lead the Jin merchants into their second era of prosperity. During the late Qing Dynasty, there were eight large Piaohao that were owned by Jin merchants, which together had almost a stranglehold on the financial industry in China at the time. However, their overwhelming success only lasted for a hundred years.

The Jin merchants had close relationships with the imperial court. The imperial court gave them several privileges when it came to doing business and, in exchange, they had to help the imperial court with its financial problems. However, in 1905, the Trans-Siberian Railway was put into use. It reduced the transport fee required to import tea from Vladivostok. This meant that the Jin merchants lost their market. After the Xinhai Revolution in 1911, debt began to rise and the merchants faced insurmountable competition from international banks. With the advent of these international banks, business in the Piaohao of Shanxi declined quickly. Finally, when China entered an era of political unrest, the Jin merchants faced further unrecoupable losses and gradually disappeared altogether.

The controversy surrounding the Jin merchants

The Jin merchants built up a legitimate and prosperous market in China and reaped a great amount of wealth from it. However, many historical records suggest that during the late Ming Dynasty the Jin merchants may have also profited from traitorous activities.

The Houjin regime (1616-1636), which was the predecessor to the Qing Dynasty, waged many wars against the Ming regime during the late Ming Dynasty. The Houjin regime was not rich enough to support the cost incurred by these numerous wars, but they did have luxury goods such as ginseng, deer antlers and furs. The Jin merchants supposedly committed treason by exchanging such luxury goods with the Houjin regime for food, clothes and other goods that were necessary for war. They received a huge amount of profit from this kind of business. Some historians theorise that the Jin merchants may have even sold military information to the Houjin regime. 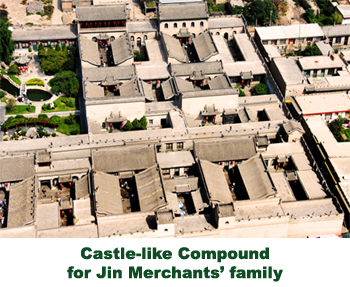 The wealthy Jin merchants built many fabulous mansions for their families. Some of them have been well preserved and are still in almost their original condition today. All of these huge courtyards exhibit the art of northern Chinese architecture perfectly. (Read more about Shanxi Grand Compound)

Join a travel with us to discover more stories about Jin Merchants: Explore Chinese Culture through the Ages