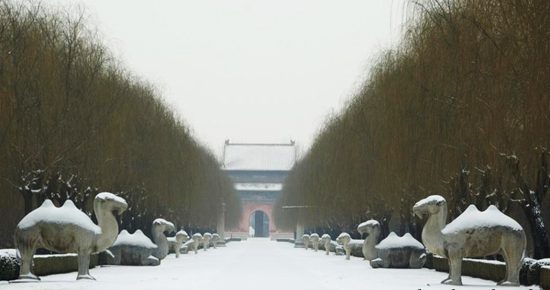 There are a total of 13 mausoleums for Emperors of the Ming Dynasty (1368-1644) here, so it is generally called the Thirteen Mausoleums. In fact, in the mausoleums you will find 13 emperors, 23 empresses, 2 princes, about 30 imperial concubines and even 1 palace eunuch, who were all cremated and placed in this group of tombs.

“Shendao” in Chinese means “the way of the spirit” or “the sacred way”. It is 7 kilometres long, and stretches from the Memorial Arch through to the gate of the main tomb, Changling Mausoleum (the mausoleum of Emperor Yongle).

The Memorial Arch is made of white marble and was built in 1540. It has 5 arches supported by 6 pillars, each with beautiful bas-relief carvings of qilin (Chinese unicorns), lions, dragons, other unusual animals and lotus flowers pared into them.

Dingling Mausoleum is the only one of the Ming mausoleums that has been excavated so far. The excavation lasted more than two years and took place from 1956 to 1958.

Xiaoduan never bore the Emperor a son, whilst Xiaojing gave birth to one son, who then became the emperor after Wanli’s death. Although Xiaojing’s son was only emperor for 29 days, he left the throne to his son. When Xiaojing’s grandson ascended to the throne and became the emperor, he promoted his grandmother to the rank of queen dowager and it was decided that her body should be moved into the imperial mausoleum.

The construction of the mausoleum started in 1584, when Emperor Wanli was only 22 years old. The mausoleum was finished when he was 28, and he had to wait another 30 years to finally use it.

When the Ming Dynasty collapsed in 1644, the tomb was damaged in a peasant uprising led by Li Zicheng and was not restored until the reign of the Qing Emperor Qianlong (1736-1795).

The underground palace is 27 metres below ground level and has a total surface area of 1,195 square metres. It is divided into 5 chambers – the antechamber, the middle chamber, the rear chamber and the left and right annex chambers. The vaulted chambers are built of stone, without employing a single beam or column. The antechamber and central chamber form a long passageway, at the end of which is the rear chamber, with the two annex chambers set at right angles to it forming a T-shape.