Stretching out over 2,300 square kilometres (888 sq. mi) of pure unadulterated grassland, Mulan Paddock represents the largest imperial hunting grounds in the world. It covers nearly twice the area of the city of London and takes up huge portions of both Hebei province and Inner Mongolia. Hunting in this huge expanse, it’s a small wonder that the Emperor ever caught anything! The hunting grounds are part of the Bashang Grasslands and belong to the portion known as Weichang Bashang. They rest about 450 kilometres (280 mi) away from Beijing and now make for a popular weekend retreat, albeit with a lot less hunting and a lot more hiking!

With Mongolian yurts dotted like small pearls across its expanse and with the vast blue sky above it, it looks like a scene from a watercolour painting. Its appearance is so idyllic that it’s hard to believe it was once a site of major political change and warfare. Mulan Paddock was originally established by the Kangxi Emperor of the Qing Dynasty (1644-1912) so that he could keep an eye on the northern borders and strengthen his control of the Mongolian region. Every year the Emperor would bring his ministers and royal army, along with his family and concubines, to hunt on these grounds and thus reassert his claim to the territory. In fact, it was these regular annual visits that eventually prompted him to build the magnificent Chengde Mountain Resort in the nearby town of Rehe (modern-day Chengde). 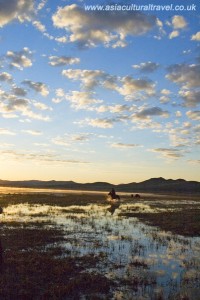 Nowadays these jade-hued grasslands are a place to relax, enjoy the scenery, cycle, ride horses, and sample tantalising Mongolian delicacies such as whole roast lamb. The area has been sanctioned off into three core attractions known as Saihanba National Forest Park, Yudaokou Grassland, and Hongsongwa Natural Conservation Zone, although there’s more to these peaceful meadows than meets the eye.

Not far from Saihanba National Forest Park, Wulan Butong Grassland once played host to one of the most epic battles in Chinese history; the Battle of Ulan Butung. On September 3rd 1690, the Kangxi Emperor allied with an ethnic subgroup of Mongolian people known as the Khalka and successfully drove Galdan Boshugtu Khan, the leader of a rival kingdom called the Dzungar Khanate, out of the grasslands. Though no evidence of this battle remains on the site, the Hongshan Army Horse Farm is a small reminder of the military purposes that these grasslands once served.

The farm was first built in 1964 and was designed to breed and train horses that could be used in the border areas. Over a period of just 40 years, this farm supplied the Chinese army with over 15,000 trained horses. That’s over 350 horses per year! At an altitude of over 1,500 metres (4,900 ft.), it’s perched at the highest point of Wulan Butong and is thus at a military advantage. That being said, the only people who appear to be raiding the horse farm nowadays are curious tourists!

One Reply to “Mulan Paddock”