Quanzhou is the largest city in Fujian and boasts a staggering population of over 8 million people. Its residents speak a variety of Min-nan Chinese, a dialect that is unintelligible to standard Mandarin, yet its local language isn’t the only thing that makes Quanzhou different from your average Chinese city. Its status as an ancient seaport has meant that, over a period of centuries, countless foreigners from across the globe have settled here and influenced the architecture, cuisine, lifestyle, and religious beliefs of its locals. So if New York is the Big Apple of cultural melting pots, then Quanzhou is the Watermelon!

The city was officially established in 718 and, during the Tang Dynasty (618-907), it rose to become one of the four major seaports in China. However, it didn’t reach the height of its prosperity until the Song (960-1279) and Yuan (1271-1368) dynasties. As the old Silk Road’s popularity began to wane due to banditry and frequent warfare, merchants looked to the sea and the Maritime Silk Road was established.

Quanzhou swiftly developed into the largest seaport in southeast China and at one point it was linked to over a hundred other ports, including Madras in India and Muscat in Oman. Foreigners from across the globe flocked to Quanzhou and eventually settled there, making their cultural mark on the city. The famous explorer Marco Polo even noted in his travelogues that it was one of the busiest seaports in the world, second only to Alexandria.

Sometime during the 10th century, tiger’s claw trees were planted around the harbour to give it a more impressive and welcoming exterior. The fiery red flowers of these trees soon caught the eyes of many sailors and the Arabic nickname for the city, Zayton, may have been derived from the Chinese name for the tree, “Citong” (刺桐). This Arabic name, meaning “olive”, was symbolic of peace and the English word “satin” is derived from it, as this fabric was mainly exported to the West via Quanzhou. Evidently in ancient times, naming anything was like one big game of Chinese Whispers!

Quanzhou’s glorious past is evidenced by the many historic sites connected to the Maritime Silk Road and the numerous shipwrecks that have been excavated from Quanzhou Bay. In particular, the wreck of a commercial vessel found in Houzhu Harbour is thought to have originally been built in Quanzhou during the 13th century and was returning from Southeast Asia at the time of its unfortunate demise. This has led researchers to believe that Quanzhou was not only an important seaport, but also a centre for shipbuilding and the development of navigation equipment. However, since one of the only examples of their ships appears to be complete wreck, we’re not altogether confident about Quanzhou’s shipbuilding abilities!

The city is sometimes referred to as the “World Museum of Religion” because of its staggering number of religious buildings. Numerous ethnic groups from countless religious backgrounds settled here, including Buddhists, Hindus, Taoists, Manichaeans, Christians, and Muslims. Somehow these conflicting religions were all able to coexist peacefully in the city and this led to the development of the many houses of worship you’ll find there today.

For example, Kaiyuan Temple is one of the oldest Buddhist temples in China; Qingjing Mosque is one of its oldest mosques; and the Cao’an Manichaean Temple hosts the world’s only stone statue of Mani, the prophet of this now extinct religion. Numerous shrines to the Chinese deity Guandi can be found littered throughout the city, as this deity controlled weather and wealth and was thus one of the most popular among fishermen and traders. Similarly Tianhou or “Heavenly Goddess” Temple is an important feature of the city as Tianhou, also known as Mazu, was considered the patron goddess of sailors. After all, in a time when Health and Safety Regulations were non-existent, the only thing you had protecting you were the gods!

Unfortunately, when the emperor cut off all foreign expeditions and trade during the Qing Dynasty (1644-1912), Quanzhou rapidly declined and many of its great ships were left to rot. The overcrowding and financial instability led many of its locals to seek new homes abroad. According to Chinese government statistics, nowadays more than two million Quanzhouese live abroad, while only half a million remain in the city. 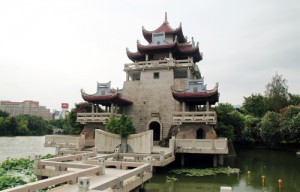 In a city abounding in such a rich history, it’s no wonder they have multiple museums! From the Puppet Museum, where visitors can learn about Quanzhou’s famous marionette shows, to the Maritime Museum, which gives visitors an insight its salty seafaring past, the history of this city still lives and breathes within its walls. Yet it’s not all about history, as the city abounds in natural beauty, from the magnificent Mount Qingyuan to the lush green East and West Lake parks. However even the mountains haven’t escaped the city’s religious fervour, as an enormous statue of Lao Tsu, the founder of Taoism, adorns the peak of Mount Qingyuan!

Like any large Chinese city, Quanzhou comes to life at night. When night falls, the local people sample tantalising delicacies in makeshift outdoor restaurants, the children fly kites in the park, young people head to the most stylish bars, and older people head to the theatre to enjoy a local opera. In the park near the Confucian Temple, amateur and professional musicians gather every night to practice Nanyin, one of the oldest musical genres in Chinese history. Some of these charming melodies date all the way back to the Han Dynasty (206 BC–220 AD) and are performed using traditional Chinese instruments with the ballads being sung in Min-nan dialect.

One Reply to “Quanzhou”