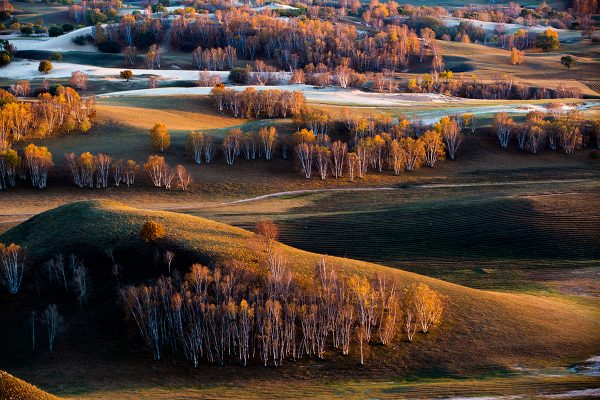 The thundering hooves of a thousand horses led by Genghis Khan as he raided northern China; the soulful songs of opera performers as they entertained Qing Dynasty emperors; the quiet trudge of the Chinese army as they marched off to another battle; these are but a handful of the many scenes that the Bashang Grasslands have played witness to over hundreds of years. Nowadays the gentle rolling hills and wide open plains serve as a place for cattle and sheep to graze, punctuated only by the Mongolian yurts that stand out like small pearls on the jade-green grass. Resting just 280 kilometres (174 mi) north of Beijing, it comes as no surprise that these magnificent grasslands have become a popular tourist location for the capital’s locals.

They cover a large portion of northwest Hebei province and rest at the junction where the North China Plain and the Inner Grasslands of Mongolia meet, making them part of the Inner Mongolia Plateau. Located at the foot of the Yan Mountains, the area is home not only to grassland but to wetlands, dense forests, shimmering lakes, and powerful rivers. With over 300 plant species growing throughout its meadows, the Bashang Grasslands have become known as a rich treasure trove for many of the ingredients used in Chinese medicine. So if you’re hiking through the plains and happen to develop a nasty headache, there’s no need to reach for that ibuprofen. You’re already surrounded by natural painkillers, panaceas, and even a few aphrodisiacs!

Overall the grasslands cover an area of 350 square kilometres (135 sq. mi) and can be split into four parts: Fengning Bashang, Zhangbei Bashang, Weichang Bashang and Guyuan Bashang. These parts rest in four separate counties of Hebei respectively, with Fengning Bashang being the closest to the city of Beijing.

Since the average altitude of the grasslands is around 1,500 metres (4,900 ft.) above sea level, it’s technically higher than many of the mountains in the Beijing area. This means that the temperature is, on average, about 10°C cooler on the grasslands and this is perhaps why the area has been a popular summer resort since the Qing Dynasty (1644-1912). When you’re sweltering in the 30°C heat of Beijing’s summer and are trapped in an underground train full of sweaty passengers, a rural paradise made up of expansive grassy plains and cool fresh air must sound too good to be true!

Yet by far the greatest draw to the area is the nomadic Mongolian culture. Imagine horse-riding or cycling through the grasslands all day, watching a local wrestling competition, sampling the tantalising fresh roast lamb after watching it cook on an open fire, and then settling down to a night of sweet sleep in an authentic Mongolian yurt. With only the sound of the lowing cattle lulling you to sleep and with the bright stars of the clear night sky twinkling above you, you’ll wonder why anyone would want to live any other way.