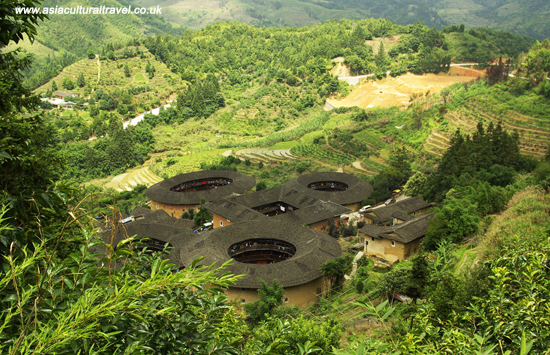 Tianluokeng is perhaps one of the most famous villages in Fujian but, with a name that literally means “River Snail Pit”, you’re probably wondering why. Is it full of river snails? Do they “pit” the snails against each other? Of course not! Tianluokeng achieved its fame because it is one of the many stunning villages in rural Fujian that boast magnificent earthen buildings known as Tulou.

The village’s name may originate from a Fujian folktale known as “The Snail Girl”, in which a poor young farmer named Xie Duan is helped by and eventually falls in love with a snail fairy called a tianluo. Some local legends even suggest that the founder of Tianluokeng, Wong Baisanlang, was helped by a fairy named Miss Tianluo. This may explain why the local farmers move at a snail’s pace!

The village rests just outside of Shuyang Town and is home to a cluster of five tulou. These gigantic, fortress-like buildings are made of packed earth and resemble fortified villages. If you look closely at their upper levels, you can still see the small gun holes that were used to shoot at bandits. Snails may hide in their shells in times of danger, but the locals of Tianluokeng preferred a more aggressive approach!

The cluster is made up of one square-shaped tulou in the centre with three round tulou and one oval-shaped tulou surrounding it. Its unusual appearance has earned it the name “four dishes and one soup”, as it resembles the layout for an average family dinner in China. Just don’t try to eat out of these dishes, or you’ll end up the size of a building yourself! 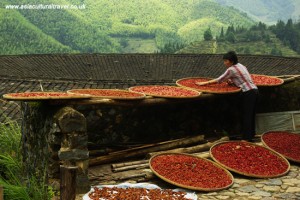 The square tulou in the centre is known as “Buyun Lou” or “Reaching for the Clouds Building” and is the oldest of the set, having been built in 1796. Unfortunately its three-storey high exterior was not enough to discourage ne’er-do-wells, as it was burnt down by bandits in 1936 and had to be rebuilt in 1953. Its four sets of stairs were designed to express the founder’s wish that his descendants achieve greatness “step-by-step”. At least he provided them with plenty of fire exits!

Hechang Lou was built not long thereafter and, in 1930, the circular Zhenyang Lou followed. In 1936 Ruiyun Lou was constructed and the last of the bunch, Wenchang Lou, was completed in 1966. The sheer size of these tulou is a miracle in itself, as each one may have taken upwards of two years to build. This means the entire complex would have taken at least ten years to finish!

According to the Chinese philosophy of Feng Shui[1], the placement of the five tulou is particularly auspicious. It is believed that bad luck is more likely to hit the corners of buildings, so many of the tulou are circular in the hopes that misfortune will slide off of their round roofs. Since the square-shaped Buyun Lou is the only one that has corners and is coincidentally the only one to have been burnt down, there may be something to this theory! Nowadays the corners of Buyun Lou are bedecked with lucky symbols in the hopes of warding off evil. Let’s just hope they fireproofed it too!

[1] Feng Shui: This theory is based on the premise that the specific placement of certain places or objects will bring good luck.

Tianluokeng is one of the many wonderful stops on our travel: Explore the distinctive Tulou(Earthen Structure)