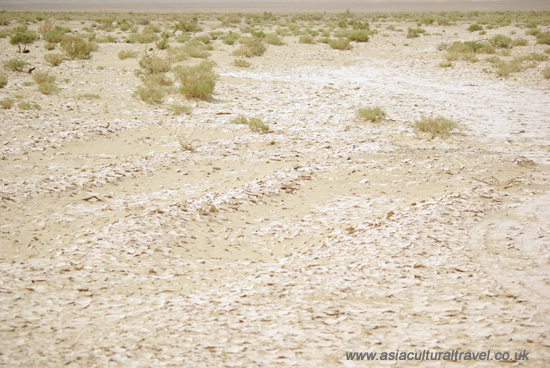 The Gobi Desert is the largest desert region in Asia and the fifth largest desert in the world. This huge expanse spans over parts of northern and northwestern China and heads deep into southern Mongolia. To the north, it is bordered by the Altai Mountains and the Mongolian grasslands, while to the west it is separated from the Takla Makan Desert only by the snow-capped Tian Shan Mountains. The Hexi Corridor and Tibetan Plateau rest at its southwest and the North China Plain is to the southeast. Bordered by rugged cliffs, snowy mountains, and lush grasslands, the rich diversity of scenery that can be found throughout the desert is truly breath-taking.

It covers an estimated area of 1,300,000 square kilometres (500,000 sq. mi), making it larger than the countries of Germany and France combined! Though romanticised depictions of this colossal desert portray it as a massive expanse of golden sand, it’s mainly made up of bare rock. This means that, in a scene worthy of the film Mad Max, visitors can easily traverse large sections of the Gobi from the comfort of their jeep.

It can be separated roughly into several regions: the Gaxun Gobi, Junggar Gobi, and Trans-Altai Gobi in the west; the Eastern or Mongolian Gobi in the centre and east; and the Alxa Plateau or Ala Shan Desert in the south. The landscapes of these areas vary wildly from barren desert steppe to inhabitable semi-desert.

Since it rests at a high altitude far to the north, the temperature fluctuations between seasons and even throughout the day can be incredibly vast. Temperatures can soar to scorching heights of up to 45 °C (113 °F) in July but then plummet to icy depths of −40 °C (−40 °F) in January. The northeast enjoys a decent level of rainfall, which allows sparse vegetation to grow, but some of the more arid areas can go without rain for up to three years! The strong north and northwesterly winds whip up sand and snowstorms throughout autumn, winter, and spring so, in short, don’t buy a holiday home in the Gobi Desert! 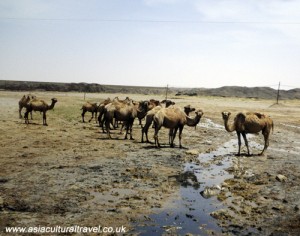 In the more hospitable semi-deserts, several large mammals such as wild camels, dzheiran gazelles, and Przewalski’s horses roam freely. There is even a subspecies of brown bear known as the Gobi bear, which is the only desert dwelling bear in the world, although it is estimated only approximately 50 remain in the wild.

With such an unforgiving climate, it’s unsurprising that the population density of the region is low. The vast majority of people living in and around the Gobi desert are of the Mongol ethnic minority, although there are now also large constituencies of Han people. Nomadic pastoral farming is the main occupation, with herders raising cashmere goats, sheep, large-horned cattle and Bactrian camels, as well as a small handful of horses.

These nomads migrate several times throughout the year and can travel upwards of 190 kilometres (120 mi) between grazing sites. To put that into perspective, if you were travelling about 95 km/h (60 mph) by car it would take you about 2 hours to get from one grazing site to another, so imagine how long it would take driving a herd of animals on foot!

Historically, it was part of the great Mongol Empire throughout the 13th and 14th centuries, and the southern part of the Alxa Plateau formed one of the major routes along the Silk Road. This gave rise to the magnificent Mogao Caves, which stand as a testament to the many travellers that passed through the Gobi in ancient times. This collection of Buddhist temples dating back to the 4th and 5th centuries can be found near Dunhuang City in Gansu province and were designated a UNESCO World Heritage site in 1987. 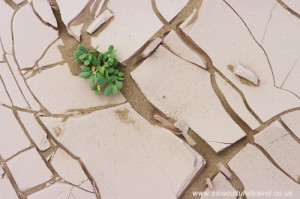 The Gobi Gurvansaikhan National Park in southern Mongolia rests in the north of the Gobi and is home to several rare species of animal, including the Gobi camel and the snow leopard. A huge stretch of sand dunes known as the Khongoryn Els extend across 100 kilometres (62 mi) of the park and are up to 300 metres (980 ft.) in height. It’s also home to the famous mountain valley known as Yolyn Am, which is so deep that the ice at its base never thaws, even during the scorching hot summer!

2 Replies to “The Gobi Desert”