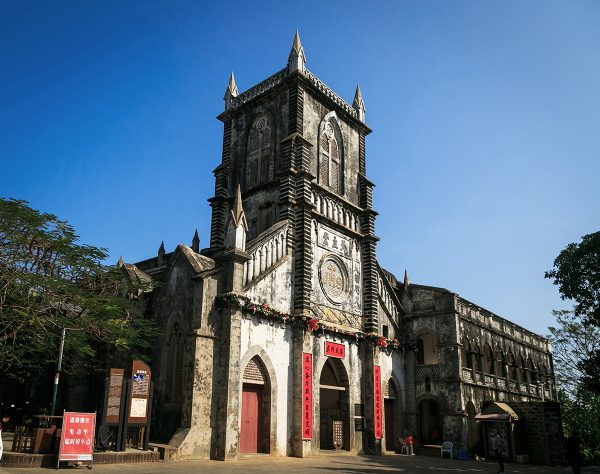 The magnificent Penglai Island is a legendary place in the East China Sea, where fairies dance about the forests and immortal Tai Chi masters roam the mountains. It is an island where, if you’re lucky, you too can achieve immortality. Throughout history many powerful leaders, including Qin Shi Huang, wasted countless resources and spent their lives searching for this mythical place. If only they’d gone to the South China Sea first, then they’d have found Weizhou Island, a real paradise on earth! Weizhou was formed over 10,000 years ago by volcanic eruptions, making it the youngest and largest volcanic island in China. It is just 67 kilometres (about 36 nautical miles) from Beihai City Port and, like Beihai, benefits from luxuriously hot subtropical weather.

The island is only 6.5 kilometres from north to south, and 6 kilometres from east to west, but its unspoiled natural landscapes and thriving wildlife make it an idyllic place to relax and get away from the hustle and bustle of the city. The splendid coral reefs in the waters, rigid pines of the forest and plump cacti blanketing the cliffs make for a sumptuous visual feast. It’s no wonder that people thought the island was a mythical place! Over thousands of years, the numerous volcanic eruptions that have taken place on the island have helped produce unusual landforms, such as the cliffs near Nanwan Port. However, don’t be plagued by nightmarish visions of lava! There hasn’t been an eruption on Weizhou for over 7,000 years.

Considering Weizhou was formed by fire and brimstone, it seems rather odd that it is home to two of the first Catholic churches ever built in China. From 1869 to 1879, French missionaries set about building a Gothic-style Catholic church in the small fishing village of Shengtang, which is now referred to as the Weizhou Catholic Cathedral. Once it was completed, they built the Saint Maria Church in Chengzai village, meaning that you never have to go too far for Sunday Mass on this small island! These churches were built using a special type of coral rock, giving them an extraordinarily unique appearance. They are now open to visitors, although the Catholic Cathedral in Shengtang is considered the most popular. The sight of this western-style cathedral, located alongside the eastern-style Sanpo Temple, aptly portrays how international these fishing villages have become, thanks in part to tourism and in part to the historical Maritime Silk Road.

If you’re feeling a little less holy and a little more hellfire, you can always take a trip to the Volcanic Park just west of Nanwan Port. The park boasts a variety of unusual volcanic formations, including Crocodile Hill, Pirate’s Cave, and Moon Bay. There’s also a lovely little Geological Museum where visitors can learn more about how the island was formed and what types of fossils they may find scattered throughout the park.

Since it is an island, Weizhou is not without its fair share of beaches. West Beach, with its soft sand, sparkling waters, and fresh seafood barbecues, is widely considered to be the finest on the island. It’s the ideal place to enjoy a refreshingly cold beverage, frolic in the sand, indulge in some snorkelling, or go diving with an instructor and marvel at the sparkling coral reefs. You can even book a space on a glass-bottomed boat and admire the marine life from the safety of your seat. However, it is important to note that there are no lifeguards on the beach so you must be very careful when swimming or taking part in other water-sports. Along with West Beach, the Multi-coloured Beach on the east coast is not without its charm. When the sun rises on this volcanic stone beach, the sunlight reflecting off of the wet, crimson rocks looks truly spectacular.

Fishing is the main source of income for many of the locals, but there are also plentiful banana plantations littered throughout Weizhou. We recommend hiking or renting a bicycle from one of the hostels so you can explore the island and take some photographs. Just be sure not to slip on those banana peels! Once you’ve worked up a healthy appetite, you can retire to one of the villages and sample some of the freshest seafood dishes in Guangxi. There are many small eateries and restaurants scattered throughout the island and, since seafood is abundant in Weizhou, most dishes are incredibly cheap. They only vary in price depending on the rareness of the seafood, what the catch of the day is, and what the weather conditions have been like, so having dinner may start to feel like seafood roulette!

Weizhou can be easily reached from Beihai port via ferry, which departs daily at 8.30am, 11.15am, 4.00pm and 5.30pm, and takes approximately 3 hours. There are reasonably regular return ferries to Beihai or, alternatively, you could stay in one of hostels on the island. These hostels are of good quality and private, air-conditioned rooms are usually available on request.

Xieyang Island is 9 nautical miles to the southwest of Weizhou and is only a twelfth of the size. There is one small path, which leads from the north side of the island to the south, and only about 100 people call this small, isolated place home. The island has become famous for its myriad of exotic birds and its tranquil forests. Visitors to Weizhou can rent a boat to Xieyang and admire the simple, unchanged lifestyle of its locals.