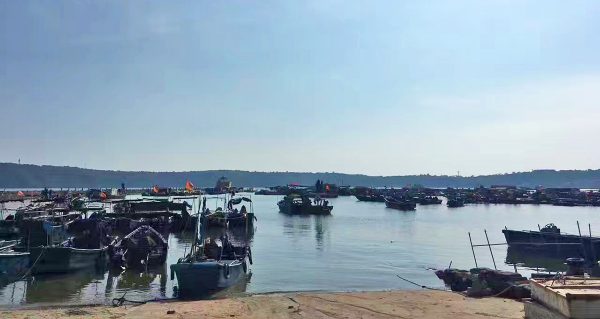 Who can resist a day out at the beach? The sun on your back, the soothing sound of the waves, the glittering soft sand beneath your feet, it’s the ideal way to spend a hot summer’s day. Yet, for most of us, a trip to the beach means a long drive spent anxiously waiting for the cool sea breeze and the first sweet taste of ice cream. In Beihai, Silver Beach is only 10 kilometres away from the city centre! Silver Beach is celebrated as the greatest beach in China and boasts rare grey-white quartz sand, which gives it its distinctive silvery appearance. Sparkling in the sunlight, both the silvery sands and crystal clear waters look far too tempting to pass up. After one day at Silver Beach, you may just scrap your retirement plans in Hawaii and decide to move to Beihai instead!

This wonderful white beach stretches 24 kilometres along the southernmost coast of China and varies from 30 metres to about 300 metres in width. Its popularity is in part due to its renowned safety, as the waves are particularly gentle and there are no sharks or other harmful wildlife in the water. This makes it an ideal place for parents to bring their children, as the beach is a safe haven for adults and youngsters alike. The beach is split into three sections: Beihai Silver Beach Park, Beihai Beach Park and Qiaogang Beach. The two beach parks have an admittance fee but the beach itself is free. These parks boast unusual buildings, a children’s swimming pool, a marine biology museum, an open-air dance floor, and even an exotic bird exhibit. If the beach just isn’t exciting enough for you or you’ve been out in the sun so long that you’re starting to look a bit like a lobster, you might want to take a stroll around the beach parks and enjoy the various attractions on offer.

In the middle of the beach, there’s a bridge that appears to go nowhere. This bridge is known as Fairy Bridge or Immortal Bridge. According to legend, a Japanese monk had come to China on a pilgrimage and happened to be walking along Silver Beach when all of a sudden he saw a rainbow drop out of the sky. The shimmering rainbow landed in the middle of the beach and, from a distance, the monk could see two figures stood on the rainbow discussing something. The monk rushed towards the rainbow but, before he could reach the talking figures, the rainbow vanished, leaving behind only this bridge. The monk supposedly spent the rest of his days praying at this bridge, hoping to catch another glimpse of the mysterious figures. That being said, we don’t recommend spending your day out praying at the bridge.

On top of sun-bathing and swimming, Silver Beach hosts a myriad of activities that are sure to tempt you. You can indulge in a little volleyball on the sand, go snorkelling in the clear blue waters, catch the adorable sand crabs as they skitter out of their holes, or go-cart along the seafront. If you fancy passing a more leisurely day, the beach is lined with several kiosks, shops, and restaurants. Here you can purchase small souvenirs, sample some of the freshest seafood delicacies, or simply enjoy an ice cream as you watch the other visitors frolic on the sand. Just be sure not to drop your ice cream, or the sand crabs might just pinch it!