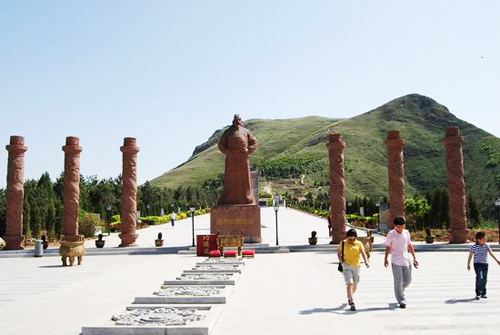 So utterly stunning is the site of Zhaoling Mausoleum that it has been the subject of Chinese poetry throughout the ages, from the Tang Dynasty (618-907) right through to the present day. The mausoleum itself has been carved into Jiuzong Mountain, about 83 kilometres (52 miles) away from Xi’an city centre. It is sometimes referred to simply as Zhao Mausoleum but is not to be confused with the mausoleum of the second Qing Emperor Huang Taji which shares the same name. Zhaoling Mausoleum was the final resting place of Emperor Taizong, the second emperor of the Tang Dynasty, and his wife, Empress Wende. It is phenomenal in its design, monumental in its scale and it completely revolutionised the way tombs were built during the Tang Dynasty. It is not only the largest Tang Mausoleum in China but is also the largest known royal mausoleum in the whole world. In its former glory, it was once a place that seemed almost ethereal in its grandeur. Nowadays, though it has suffered from the blows of time, it still provides a fascinating insight into the feudal system that led to modern China as we know it today.

Building of the mausoleum began over 1,300 years ago, in 636 A.D., and, although it only officially took 13 years to complete, it was added to and renovated over a period of 107 years. It was the first royal mausoleum to have been built into a mountain face, as oppose to the traditional burial mound on flat land. Supposedly the idea for building the mausoleum on Jiuzong Mountain came when the Empress Wende, being well-known for her humility, was on her deathbed and asked for a simple and frugal burial, saying “please bury me on the mountain and do not heap the grave”.

This gave Emperor Taizong a brilliant idea. He realized that the mountain, which is 1,188 metres above sea level and surrounded by the Jingshui River at its front and the Weishui River at its rear, was not only a magnificent place for a mausoleum but was also acted as a natural protective barrier against thieves and looters. Thus Emperor Taizong masterminded the building of his mausoleum and enlisted the help of the famous Tang technicians and painters Yan Lide and Yan Liben in its design. The mausoleum stretches over 200 square kilometres (88 square miles) and is split into sections above and below ground. The tomb passage alone, which leads to the tomb of Emperor Taizong, is 230 metres long and is guarded by five stone gates. In order to further deter looters from his tomb, Emperor Taizong even went so far as to write an inscription on the outside of the mausoleum which states: “A ruler takes the whole land under Heaven as his home. Why should he keep treasures within his tomb, possessing them as his private property?”. The implication was that the tomb was empty, as Emperor Taizong saw no reason to take his worldly goods to the grave, but this is in fact very far from the truth. 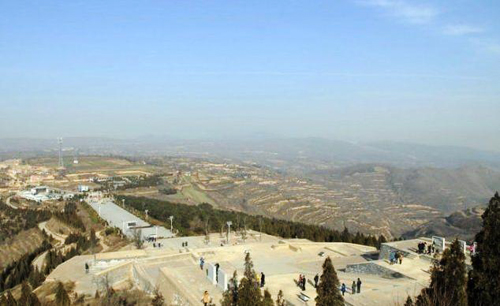 The mausoleum has nearly 200 satellite tombs that house famous ministers, members of the royal family and high ranking officials, but these satellite tombs are all further down the mountain than the Emperor’s tomb to symbolise his authority over them. It is the only mausoleum that exhibits the five styles of satellite tombs. Each tomb represents the relationship that the deceased had to the emperor. For example, the tomb of the princesses, the daughters of Emperor Taizong and Empress Wende, are located near to their father’s tomb and have either paired mounds at one end or are topped by a mound in an inverted dipper shape with four earthwork mounds. By contrast, daughters of Emperor Taizong born of concubines are further away from their father’s tomb and have a much simpler structure. This diversity creates a stunning yet surreal landscape that Tang Dynaty poet Du Fu described in his poem “Revisiting Zhaoling Mausoleum” as such:

“A line of tombs winds skyward up the slope

Where mountain beasts keep to their leafy lair;

I peer along a pine and cypress lane

Only clouds of sunset hanging in the air.”

Yet these satellite tombs are just the beginning of what was and still is a very lavish affair. Above ground, there once stood a complex that was unmatched in its splendour, including the Xuanwu Gate on the north side, the watchtower, the Zhuque Gate, Xian Hall and the sacrificial altar. This complex was once referred to as a miniature “Imperial City” because of its sheer size. Now all that remains are the Six Steeds of Zhaoling, the base of the sacrificial altar and a stone sparrow ornament from the ridge of the Xian Hall’s roof that is 1.5 metres in height. The size of this stone ornament alone gives you an idea of the scale of the building that once supported it.

The cemetery itself is still covered in the rich green pines, cypresses, huge Chinese scholar trees and poplars that earned it the name “the City of Pines”. The late Tang poet Liu Cang once wrote: “Entering the site of the underground palace along the mountain ridge, you will feel the chill of shady pines as if at midnight”. In this one sentence, Liu Cang captures the otherworldly nature of the mausoleum that makes it a site of such intrigue, even to this day. Though the surface buildings are gone, the mausoleum and the City of Pines still remain, untouched and unfaltering in their surreal majesty. 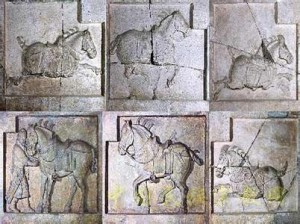 Only 37 of the satellite tombs have been excavated, but most of the artifacts that were found in these tombs are exhibited in the Zhaoling Museum. There you will find gorgeous Chinese porcelain, red Chinese pottery, painted pottery, glazed pottery, and tri-coloured glazed pottery from the Tang Dynasty. This pottery often takes the form of figurines, some of which, such as the figurines of ethnic minorities, demonstrate the close relationship that Emperor Taizong had with various ethnic minority groups during his reign. There are even a few glazed camels carrying silk cloth, as they would have done along the Silk Road over a thousand years ago. You’ll also find brightly coloured ancient paintings and murals depicting nobles and their life styles, from their frequent business trips to their leisure time spent singing, dancing and playing games, from ladies-in-waiting to courtiers. The museum houses one of three special official hats, personally made by Emperor Taizong, that were only awarded to the most distinguished courtiers and are incredibly rare.

The Mausoleum and the Museum together present the chance to witness a true tableau of life in Feudal China. To witness the tombs snaking their way up the mountains, to feel the haunting chill of the pine tree cemetery, to gaze upon ancient tombstones hand-written by famous calligraphers, now also in their tombs, is an opportunity that can’t be missed. If you want to embed yourself in history and feel the thrill of living in a time when Emperors ruled and true heroic exploits breathed life to legends, then Zhaoling Mausoleum is the place for you.

One Reply to “Zhaoling Mausoleum”