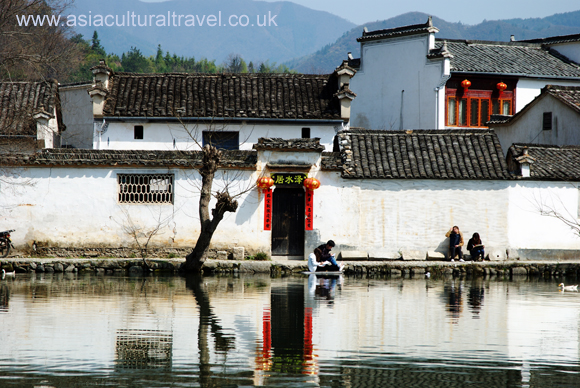 With its startling whitewashed walls and ornate black roofs, the village of Hongcun looks like a backdrop torn straight from a martial arts epic. If you feel like you recognise the place, then you probably do! Several scenes from Ang Lee’s Kung-Fu masterpiece Crouching Tiger, Hidden Dragon were filmed on location in this very village, sky-rocketing it from isolated rural paradise to local superstar. Alongside the nearby village of Xidi, its unparalleled beauty and historical importance meant it was designated a UNESCO World Heritage Site in 2000.

The village itself is located in Yi County of southern Anhui province, in an ancient region once known as Huizhou. In accordance with feng shui[1] theory, it was founded at the foot of a hill next to a stream. A network of canals throughout the village channels water from the stream, culminating in the Moon Pond at its centre and the South Lake at its southern edge. The emphasis on harmony between man and nature is palpable throughout Hongcun, from the tranquil alleyways lined with potted plants to the picturesque gardens and soft rippling of water as it trickles through the many tiny canals. 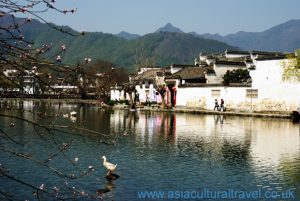 Among the ancient villages of Anhui province, its most unique feature is its unusual layout. The village was arranged to resemble the shape of an ox, with nearby Leigang Hill as its head and the two trees standing on it as its horns. The four bridges that span the Jiyin stream at its front and rear can be interpreted as its legs, while the houses form its torso. The canals are its intestines, the Moon Pond is its stomach, and the larger South Lake represents its abdomen. So, if you decide to visit Hongcun, you could say you’re walking into the belly of the beast!

The village was originally established by the Wang clan during the Song Dynasty (960-1279), although most of its buildings date back to the Ming (1368-1644) and Qing (1644-1912) dynasties. It was during these latter two dynasties that it flourished as a centre for trade, meaning its locals were able to construct the exquisite houses that you see today. However, there was a slight catch!

According to Confucian principles, merchants were considered one of the lowest social classes and therefore it was deemed improper for them to build the kind of grand mansions associated with scholars or the aristocracy. Although they were staunch followers of Confucianism, many of the locals in Hongcun were also merchants and were keen to show off the fortune that they had amassed through trade. Being the savvy businessmen that they were, they soon found a loophole! They decorated their humble homes with the finest woodcuttings, brick sculptures, and stone engravings that money could buy. From the outside, they may look like simple cottages but, on the inside, they are furnished like palaces!

While many of the houses in Hongcun are still privately owned, some of them have been opened to the public. Roughly 150 buildings are scattered throughout the village, the largest and most spectacular of which is Chengzhi Hall. This grand mansion, known locally as the “Folk Imperial Palace”, consists of over 60 rooms and was originally constructed by a wealthy salt merchant to accommodate his two wives. Judging by the sheer size of the place, they obviously didn’t get along!

Nowadays the hall has been converted into a small museum, where visitors can marvel at its intricate woodcuttings depicting scenes from nature, Chinese mythology, or daily life in the Qing Dynasty. According to local records, over five kilograms (11 lbs.) of gold was used to gild these wood-carvings! If you look closely, you may still see a few faded yellow slogans on the walls that read “Long Live Mao”. These were left behind by soldiers from the Red Army, who used the hall as a temporary base during the Long March[2]. 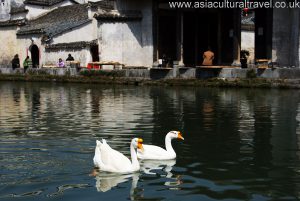 On the north bank of South Lake, you’ll find another one of the village’s historic gems: the South Lake Academy. It was constructed in 1814 as the result of combining six existing “family schools”. These “family schools” were built by individual clans to educate their descendants in the hopes that they would succeed in the imperial examinations and achieve a high-ranking government office. The South Lake Academy is beautifully preserved, and is archetypal of the family academies that became popular throughout the Huizhou region during the Qing Dynasty.

Yet arguably Hongcun’s most outstanding feature is its preservation of not only its historical buildings, but also its ancient customs and way of life. Stylish boutique hotels with heated brick beds, stores tucked away in small alleys selling traditional ink-brush paintings, and restaurants offering sumptuous regional specialities are all sure to give you the feeling of having been transported back in time.

One Reply to “Hongcun Village”