With its labyrinthine streets and elegant architecture, the ancient village of Chengkan is endowed with an air of mystery. Surrounded by eight mountains and halved by the S-shaped Longxi River, the village’s location is no accident. Its layout and placement were designed to replicate a traditional Chinese pattern known as Bagua or the Eight Diagrams, which is derived from a classical text known as the I-Ching or Book of Changes and contains the famous Yin-Yang symbol. The Yin part of the village is represented by the fields, while the Yang part is made up of residential buildings, with the river separating the two. According to traditional feng shui[1] principles, its unique design is particularly auspicious and is thought to bring the villagers good fortune. In a place as picturesque as Chengkan, most people would think you were lucky just to live there!

The village was built over 1,800 years ago and was originally known as Longxi, but its name was changed towards the end of the Tang Dynasty (618-907) when it was occupied by the Luo family. The Luo brothers were great believers in feng shui theory and, after they recognised the importance of the village’s location, they decided to settle there in a bid to improve their family’s fortunes. In fact, Chengkan is widely believed to be one of the best examples of feng shui theory in practice! Unlike the villages of Hongcun and Xidi, Chengkan has yet to become a popular tourist attraction, in spite of the fact that it is located just 40 kilometres (25 mi) from Mount Huang.

The village itself is a veritable maze, with three main streets and ninety lanes crisscrossing one another in a hectic mesh. In its heyday, it originally consisted of ninety-nine lanes, making it even more complex to navigate! While the village may have been established in ancient times, its oldest remaining buildings actually date back to the Ming Dynasty (1368-1644). With their white-washed walls, black tile roofs, artistic woodcut panels, and elaborate stone carvings, the mansions and temples of Chengkan are said to exemplify the intricate beauty of Hui-style architecture. There are over 150 ancient residences in Chengkan and 21 major historic sites, which are currently under state protection.

The entrance to the village is marked by the Shuikou or “Water Gap”, where a pond full of blossoming lotus flowers entices people in. From there, its most iconic attraction is Baolun Hall, which is part of Luo Dongshu’s Ancestral Temple. Luo Dongshu was an accomplished scholar, as well as a hermit, who lived during the Song Dynasty (960-1279) and who greatly contributed to the fine reputation of the Luo family in Chengkan. The temple was constructed by his descendants so that they may honour his memory and worship him. So remember, next time you have to help your parents with something, at least they’re not asking you to build them a temple! 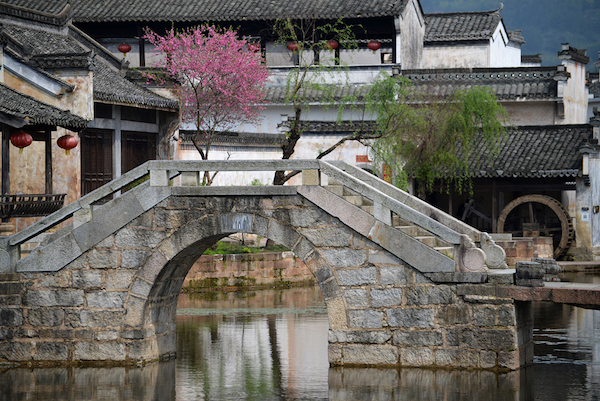 Once you’ve passed through the first three entrances of the temple, you’ll arrive at the magnificent Baolun Hall. It was originally built in 1542, during the Ming Dynasty, and is famed for its stunning murals, which have barely faded in spite of the fact that they are over 500 years old! Vivid sculptures of lions, clouds, and lotuses grace the façades of bluestone parapets, wooden eaves, and crossbeams. Ascending the wooden staircase to the attic, you’ll be treated with a breath-taking panoramic view of the village below and the lofty Mount Huang in the distance.

While Baolun Hall is one of the most impressive features in Chengkan, it is by no means the most important. Since the village is split by a river, it should come as no surprise that the oldest and arguably most significant structure is Huanxiu Bridge, which dates all the way back to the Yuan Dynasty (1271-1368). You could almost say it bridges the gap between the past and the present! Another major attraction in the village is Luo Chunfu’s Residence, which was constructed in 1730. From the granite slabs and black bricks that make up its gate to the elegant reliefs on its eaves, its unusual décor makes it stand out from other mansions in the village. After all, the Luo family were nothing if not extravagant!

Alongside Luo Dongshu’s Ancestral Temple, Changchun Temple is the other main house of worship in Chengkan. In ancient times, this was the place where the Luo family and neighbouring villagers would worship the God of Earth. In spring, they would pray for favourable weather so that their crops would grow, while in autumn they would thank the gods for a bumper harvest. The beauty and prosperity of Chengkan itself is evidence enough that the gods were clearly listening to the Luo family’s prayers!

Chengkan is one of the many wonderful stops on our tour: Explore the Ancient Chinese Villages in the Huizhou Region