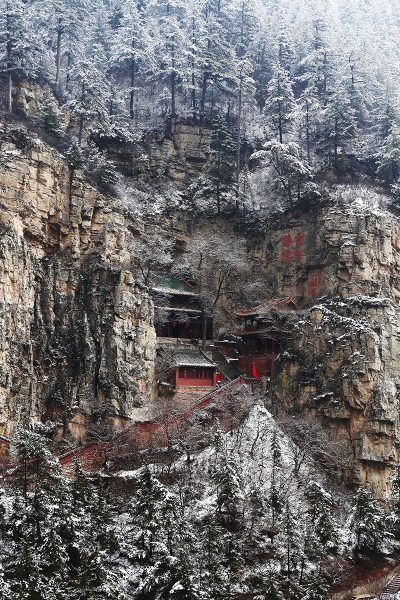 Located just 62 kilometres (39 mi) south of Datong City, Mount Heng is a behemoth of a mountain range and consists of over 100 separate peaks. Not only is it considered one of China’s Five Great Mountains, but it also boasts the highest peak of them all, Tianfeng Peak, which towers in at over 2,100 metres (6,900 ft.) in altitude. To put that into perspective, it’s nearly twice the size of Ben Nevis, the tallest mountain in the UK! Yet it’s not the mountain’s size that has earned it such prestige, but its religious value. According to the Chinese religion of Taoism, Mount Heng is considered a sacred mountain and has been a site of pilgrimage since the Zhou Dynasty (c. 1045-256 BC).

It is sometimes referred to as Northern Hengshan because there is another Mount Heng in Hunan province which is coincidentally also one of the Five Great Mountains. Although their names are written differently in Chinese, they are pronounced in the same way and so the prefixes “northern” and “southern” are used to differentiate them. Imagine having twins named “Stephen” and “Steven”, and you get the idea!

According to legend, over 4,000 years ago Emperor Shun (c. 2294-2184 BC) was on a tour of his northern territory when he came upon Mount Hengshan and was so impressed by it that he simply named it Beiyue (北岳) or “Northern Mountain”. When it came to imperial prestige, Mount Hengshan had literally reached the pinnacle! Another legend purports that Zhang Guolao, one of the Eight Immortals in Taoist mythology, secluded himself on the mountain and is still there somewhere practising his faith. So if you bump into any strange old men while you’re hiking, be sure to be polite!

The mountain was held in such high esteem that a temple known as the Shrine of the Northern Peak or Beiyue Temple was erected there during the Han Dynasty (206 BC– 220 AD) and was dedicated to the god within the mountain. During the Qin Dynasty (221-206 BC), Emperor Qin Shi Huang not only named it as one of the 12 most sacred mountains, but also regarded it as the “Second Greatest Mountain in the entire World”. From then onwards, emperors, scholars, travellers, poets, monks, and people from all walks of life came to visit this alluring mountain range. Many of them left behind stone inscriptions extolling its incredible beauty, which can still be seen along the mountain paths today. 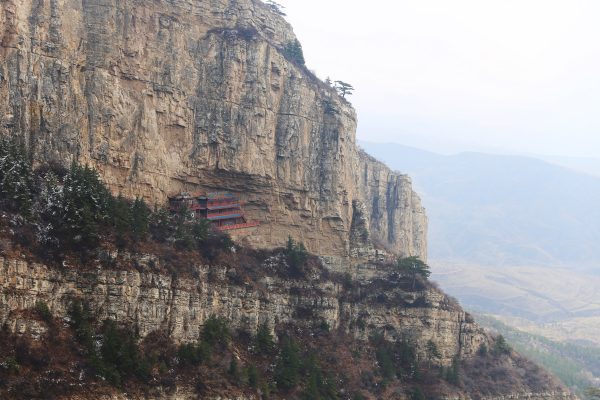 However, its northerly location meant that it was frequently cut off from China proper, as historically northern China was often under the control of non-Chinese kingdoms. This meant that it was not as accessible to pilgrims as the other Five Great Mountains, and so as a consequence it is the least-developed and least-visited of the five. Although therefore it is considered to have less religious importance, it is also less crowded and less commercialised, making it a more peaceful and isolated place to go hiking. In the summer, its hills come to life in a flurry of lilac blossoms, and its verdant pines, elms, firs, poplars, and bountiful forests provide stunning views throughout the year.

Alongside the Beiyue Temple, perhaps its greatest claim to fame is the Hanging Temple, which has survived for more than 1,500 years clutching precariously to the side of a cliff. The temple’s unusual appearance, coupled with the fact that it is dedicated to not just one religion but to Buddhism, Taoism, and Confucianism, means it has recently become a mecca for visitors looking to explore China’s architectural curiosities.

Yet this isn’t the only bizarre feature the mountain has to offer. The Kutian or “Sweet and Bitter” Wells are located about halfway up its slope and are simply two wells placed very close together. For reasons unknown, the water from one well is sweet and refreshing, while the water from its neighbour is bitter and has a distinctly unpleasant aftertaste. Perhaps one well is the other’s evil twin! In spite of the fact that the “sweet” well is only a few feet deep, its waters are inexhaustible, further adding to the mystery of this exceptional oddity. In fact, during the Tang Dynasty (618-907), Emperor Xuanzong visited the “sweet” well and found it so fascinating that he christened it “Dragon Spring”.

The area surrounding Mount Heng is distinctly less magical, as it was once a battleground and its plains have been ravaged by centuries of warfare. Relics of these ancient skirmishes can be found littered throughout the landscape, from tactical passes and small fortresses to colossal castles and beacon towers. The most well-known of these is Golden Dragon Gorge, which is a deep yet narrow pass that was used by General Yang Ye of the Northern Song Dynasty (960-1127) to resist an invasion from the neighbouring Liao Dynasty (916-1125).

Other natural sites on the range include Sisters-in-Law Cave, Flying Stone Cave, Tiger Wind Gap, and Clouds Out Cave, which are all symbolically named and as such are imbued with a certain mystical quality. Clouds Out Cave is arguably the most spectacular as, on a clear and sunny day, it looks like any other cave, but when it’s raining or foggy then mist will billow out of the cave’s entrance and endow it with an ethereal appearance. Perhaps it’s haunted by the soldiers who died in Golden Dragon Gorge; perhaps it’s where Zhang Guolao lives; or perhaps there’s just a hole somewhere in the top of the cave!

One Reply to “Mount Heng”