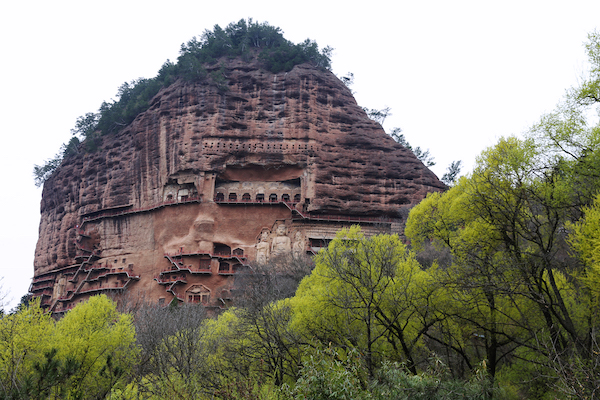 The drooping cypresses, wild flowers, and verdant grasses that surround the Maiji Mountains are a nature lover’s paradise, rich with inviting sights and fragrances. Yet break through the forest or look up through the trees and you’ll be met with the most awe-inspiring sight of all, a 16-metre (52 ft.) tall statue of Buddha that is over four times the size of a fully grown African elephant! This is just a small portion of the Maijishan Grottoes, a complex of 194 caves that have been cut directly into the cliff-face and filled with over 7,200 Buddhist sculptures and 1,000 square metres (10,700 sq. ft.) of intricate murals. They are considered one of the Four Grand Groups of Grottoes, standing alongside the Mogao Grottoes in Dunhuang, the Yungang Caves in Datong, and the Longmen Grottoes in Luoyang. 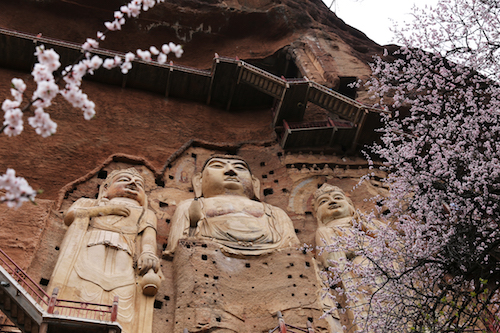 The mountain itself sits at an altitude of 1,700 metres (5,577 ft.) and is named “Maiji”, meaning “wheat”, “corn”, or “grain stack”, due to its unusual appearance. It is tall in the middle, narrow at the bottom, and completely flat on the top, meaning it resembles a stack of wheat. So be careful when you take photographs of this scenic spot, or they might come out a little grainy! The caves are separated by number, with numbers 1 to 50 on the western cliff-face and numbers 51-191 on the eastern cliff-face.

The sudden surge in popularity enjoyed by Buddhist grottoes started sometime during the Later Qin Dynasty (384-417), when Buddhism began making its way from India to China via the Silk Road. It gradually travelled through Gansu province thanks to the support of the Northern Liang Dynasty (397–460) and it was around about this time that construction of the Maijishan Grottoes began. Sometime between 420 and 422, a monk named Tanhong settled at Maijishan and began building a small monastic community there. He was swiftly joined by another monk named Xuangao, who brought 100 followers to the mountain, and eventually this community grew to be over 300 strong.

The grottoes’ unique location resulted in a strange mixture of artistic styles, as they rest near to the East-West route that connected Xi’an with Lanzhou and Dunhuang. This route eventually led as far south as India, and so their position at this pivotal crossroads resulted in the sculptors being heavily influenced by Indian and Southeast Asia styles of art. Although the earliest artistic influences came from Central Asia, sculptures from around about the 6th century have a much more southern India and Asian appearance. As the caves were renovated and repaired during the Song (960-1279) and Ming (1368-1644) dynasties, the sculptures took on far more central and eastern Chinese-style features. 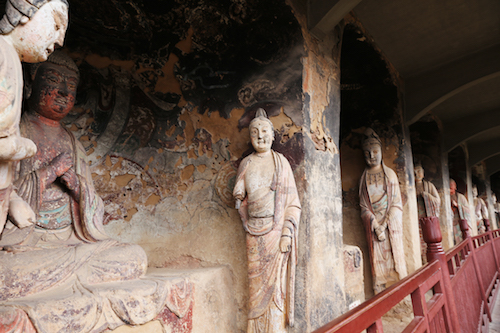 Construction of the grottoes reached its peak during the Northern Wei (386-535), Western Wei (535–557), and Northern Zhou (557-581) dynasties, but continued well into the Ming (1368-1644) and Qing (1644-1912) dynasties, representing over 1,000 years’ worth of effort and artistry. The earlier caves are far more simplistic in design and mainly feature a seated Buddha flanked by bodhisattvas[1] and other attendants. The most commonly used Buddha in these sculptures is known as Amitābha, the principal Buddha of the Pure Land branch of Buddhism.

He is well-known for his ability to enable his followers to be reborn into his heaven, known as the “Pure Land”, where they worship diligently until they are made into bodhisattvas and Buddhas in their own right. This school of Buddhism was hugely popular during the Western Wei Dynasty, hence why such emphasis was placed upon it in Buddhist grottoes at the time. After all, who could resist the opportunity to become worshipped as a demi-god? 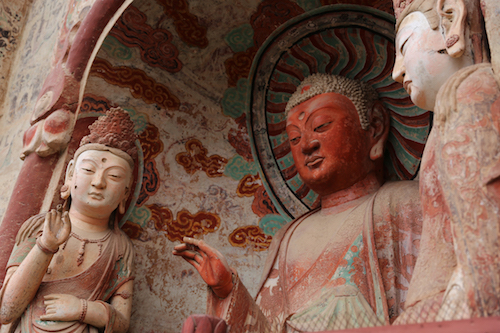 The bodhisattvas who usually accompany Amitābha are Avalokitesvara on his right and Mahasthamaprapta on his left. Avalokitesvara is the most identifiable, as he is typically depicted with an image of Amitābha on his headdress and a small water flask in his hands. In a few more hundred years, Avalokitesvara will change genders and eventually reappear in the grottoes as the bodhisattva of mercy, known as Guanyin. That being said, when it comes to eternal enlightenment, it doesn’t really matter if you’re a man or a woman! Other statues include those of the historical Shakyamuni[2] Buddha and Maitreya[3], the Buddha of the Future.

Nearly all of the sculptures are made from a mixture of clay and some sort of binding agent, which has helped to preserve them. There are a few stone sculptures dotted throughout the complex that are made of sandstone, but bizarrely not the kind that is indigenous to the mountain. Instead, this sandstone is of unknown origin and to this day no one knows how these statues were made or how they were hauled up into the caves. Perhaps it was an act of God, or Buddha!

[2] Shakyamuni: One of the titles of Gautama Buddha, the central figure and founder of the Buddhist faith. It is derived from the place named Sakya, which is where he was born.

[3] Maitreya: In the Buddhist tradition, Maitreya is a bodhisattva who will appear on Earth sometime in the future and achieve complete enlightenment. He will be the successor to the present Buddha, Gautama Buddha, and is thus regarded as a sort of future Buddha.

Maijishan Grottoes is one of the many wonderful stops on our travel: Explore the Silk Road in China

One Reply to “The Maijishan Grottoes”