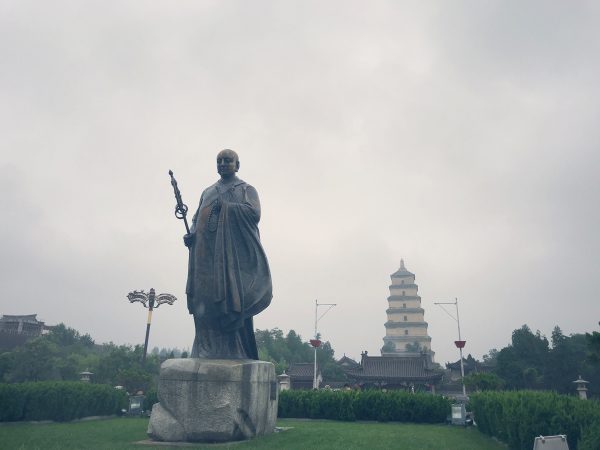 Da Ci’en Temple in Xi’an city is best known for housing the famous Great Wild Goose Pagoda and the largest musical water fountain in Asia. Yet there is more to this temple than simply these two attractions. The temple site is separated into four squares, each with its own attractions and historical meaning. The history behind this Buddhist temple is both fascinating and poignant. The reason behind its name, in particular, is a story of mourning and filial piety[1], a concept held in high-esteem in Chinese culture. So what exactly does “Da Ci’en” mean? And what does Da Ci’en Temple have to offer tourists today?

Da Ci’en Temple rests on the site of an ancient pagoda that was built in 589 A.D., during the Sui Dynasty, and was called Wu Lou (Five Storey) Temple. Over the years this temple fell into disrepair, but in 648 A.D., during the Tang Dynasty, the crown prince Li Zhi spearheaded the renovation of the temple in honour of his mother, the Empress Wende, who had tragically suffered an early death. Li Zhi wanted to pay tribute to his mother’s kindness and so named the temple “Da Ci’en”, which means “kindness and grace” in Chinese. This Temple of Kindness and Grace has stood as a monument to Empress Wende for centuries and it was said that, when Li Zhi became emperor and changed his name to Emperor Gaozong, he still took time to look out from Hanyuan Palace at the temple twice a day in order to pay homage to his beloved mother. The famous Buddhist monk Xuanzhang[2] was abbot of this temple and masterminded the construction of the Great Wild Goose Pagoda there. The temple originally had 13 separate courtyards and 1,879 rooms, all of them unmatched in their grandeur, but tragically the temple once again fell into disrepair after the fall of the Tang Dynasty. It was renovated during the Ming Dynasty and the surviving halls and rooms were all built during that time. 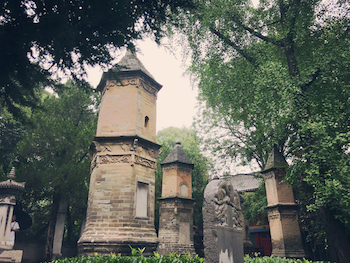 Nowadays the temple is full of interesting historical sites and stunning gardens that are regularly enjoyed by tourists and locals alike. The temple site is separated into four parts: the North, South, East, and West Squares. In the North Square you’ll find a copper statue of an ancient book that tells the story of how the Tang Dynasty rose to power. There are two Buddhist beacons in this square, both 9 metres tall, which are designed after the famous Mogao Grottoes in Dunhuang. You’ll also find statues of famous figures from the Tang Dynasty, such as the poets Li Bai, Du Fu, Wang Wei, and Han Yu, the unparalleled calligrapher Huai Su, and the “King of Chinese Medicine” Sun Simiao, scattered throughout the square.

In the South Square the focal attraction is the statue of the monk Xuanzhang. It is a place where many Buddhists and locals come to relax and appreciate the majesty of this historical figure. In the East Square you’ll find the Shaanxi Opera Garden, where visitors can enjoy stunning reliefs, paintings and statues of writers, scenes and characters from the Qinqiang (Shaanxi) style of Opera. The West Square is also a garden but it is predominantly dedicated to representations of daily life in ancient Shaanxi and is called the Shaanxi Folk Customs Garden. The only recognisable historical figures in the garden are sandstone statues of the Tang generals Qin Shubao and Yuchi Jingde, who together guard the gate into the park. The rest of the statues depict scenes and features of ancient Shaanxi life, such as the roaring crowd during a local opera and the large, round baked wheat cake that has been a staple food in Shaanxi for hundreds of years. The streets that link the North and the South Square also contain similar statues of wrestling competitions, birthday parties or visits to the doctor in ancient Shaanxi and are also a perfect place to pick up a few souvenirs.

On top of all of this, you also have the Tang Ci’en Temple Site Park (originally Chunxiao Garden) to the east of Da Ci’en Temple, where locals and tourists can relax and practice Tai Chi. It rests on the site of the original Da Ci’en temple and thus contains many statues that depict the temple’s history. Not to mention there is also the Great Tang All Day Mall in the south part of Da Ci’en Temple, which is a triumphant combination of modern buildings and artificial Tang-style architecture. This huge mall complex contains some fantastic attractions, including the Zhenguan Monument, the Xi’an Concert Hall, the Xi’an Grand Theatre, the Qujiang Cinema and the Shaanxi Art Gallery, to name but a few.

With all of these magnificent attractions on offer, you’ll need to set aside at least a full day to get the most out of your trip to Da Ci’en Temple.

[2] Xuanzhang (602 – 664 A.D.): Xuanzhang was a Chinese Buddhist monk and scholar, who mainly studied and focused his efforts upon the interaction between China and India during the Tang Dynasty.

Join our travel to visit the Da Ci’en Temple: Explore the Silk Road in China and Explore Chinese Culture through the Ages

One Reply to “Da Ci’en Temple”