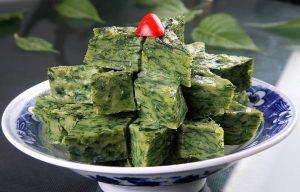 Like its neighbour Sichuan, Shaanxi’s cuisine is characterised by its intense spiciness. However, unlike other spicy styles of cuisine in China, Shaanxi differentiates itself by utilising strong, heavy, salty flavours that comfort the palate and warm the body in this particularly cold climate. The emphasis in Shaanxi cuisine is on savoury flavours so salt, garlic, onion, and vinegar are liberally used, with a marked lack of sugar compared to other styles of Chinese cuisine. As Shaanxi is in the north of China, the preferred staple dish is noodles over rice, although Shaanxi noodles differ from those of Beijing and Shanxi in terms of their width, thickness and length. When it comes to Shaanxi noodles, bigger is better. Many Shaanxi signature dishes are characterised by wheat or rice noodles that are almost freakish in size, but no less delicious than their smaller counterparts.

Shaanxi cuisine is best known for its pork and mutton dishes, although other meats, such as beef, duck and chicken, are still popular throughout the province. Shaanxi cuisine can be separated into three different types: Northern Shaanxi style, Guanzhong style, and Hanzhong style. Northern Shaanxi style is characterised by its pork dishes and its predominant use of steaming as the main cooking method. Guanzhong style is known for its distinctively heavy flavours and utilises both pork and mutton equally. Hanzhong style bears the greatest similarity to Sichuan-style cuisine and is known for its particular spiciness. Amongst the cannon of delicious Shaanxi signature dishes, we’ve selected but a few to give you an idea of what this province has to offer.

Yangrou Paomo is the most famous dish in Shaanxi and quite possibly one of the most famous dishes in China, receiving praise from numerous Chinese celebrities visiting Shaanxi. To this day the dish is still served in the traditional way, which may seem bizarre to people who aren’t local to Shaanxi. First you will be served with one or two pieces of wheat flour flatbread, but don’t eat them! Although it may seem like an appetizer, this bread is actually part of the main dish. You must break the bread into small pieces, the smaller the better, and this can prove quite a challenge as the bread can be quite hard. The waiter or waitress will then take the broken pieces of bread back to the chef, who will soak the crumbled flatbread in deliciously seasoned mutton gravy. After about five to ten minutes, the chef will ladle the soup and bread back into your bowl, along with a generous helping of noodles and sliced mutton. The waiter will typically offer coriander, sweet pickled garlic and hot chilli paste to garnish the dish. These accompaniments are designed to alleviate the potential greasiness of the mutton and add flavour to the dish. 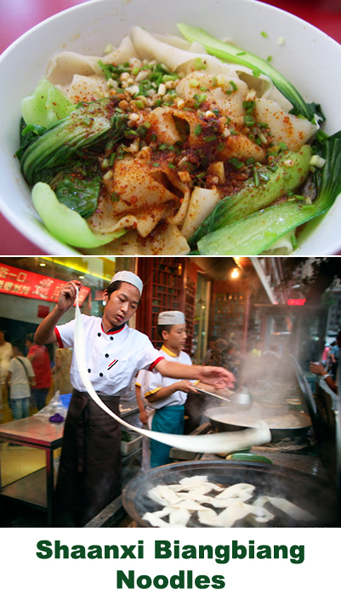 The Chinese character for “biáng” is considered one of the most complex characters in the Chinese language and still has yet to be officially featured in the Chinese dictionary. This character is so complicated that various rhymes have been written to help people remember how to write it. No one knows exactly what the character means or how it came to be, but its unfathomable complexity has helped make it and the noodles that bear its name famous throughout China. Biángbiáng noodles are known as one of the “ten strange wonders of Shaanxi province” thanks to their unusual name and characteristic shape. They are sometimes described as being like a belt due to their extreme thickness, width and length. The noodles are pulled by hand and were originally considered a poor man’s meal, as their ingredients are cheap and abundant in Shaanxi. Nowadays they enjoy great popularity and even feature in some of the trendier restaurants in Beijing. The dish differs from restaurant to restaurant with varying garnishes such as hot red chillies, coriander, beef or mutton, though the shape of the noodles remains largely the same.

This dish dates back to the Tang Dynasty (618-690 A.D.) and was traditionally made using a hen that weighed only one kilogram (2 lb.). The dish does not actually contain any gourds and gets its name from the chicken, which is shaped to look like a gourd. To make the dish, a whole chicken is boiled, steamed and then fried. After that it is either shaped to look like a gourd or, in some restaurants, placed into a decorative gourd-shaped container. The tender chicken melts off the bone and the crispy skin adds a mouth-watering crunch to the dish. The chicken is normally served with a sauce made from chilli, fennel, salt and pepper, but most people say this is unnecessary as the chicken alone tastes divine. We recommend you eat this dish as part of a group, as the chicken is served whole. That being said, after one bite you may want it all to yourself!

This dish is one of the oldest established dishes in Shaanxi and dates back over 1,300 years. It made its debut in the ancient capital city of Chang’an (modern-day Xi’an), where it was served at imperial banquets. Later it became popular with the lower class and has endured to this day. This dish is a type of hotpot. The broth is made by stewing the bones of chickens, ducks and pigs. This is what gives the broth its distinctive milky appearance. The broth is then served in an ornate red copper pot and is heated by burning local Xifeng liquor, instead of charcoal. The Xifeng liquor gives off a sweet, tantalising aroma as it is burned. Strips of clean, white flesh from a freshly-caught carp are then added to the bubbling soup. Once the fish has cooked through, the dish is ready to eat. The soup has a rich savoury flavour and it softens the carp perfectly so that the flesh flakes off easily.