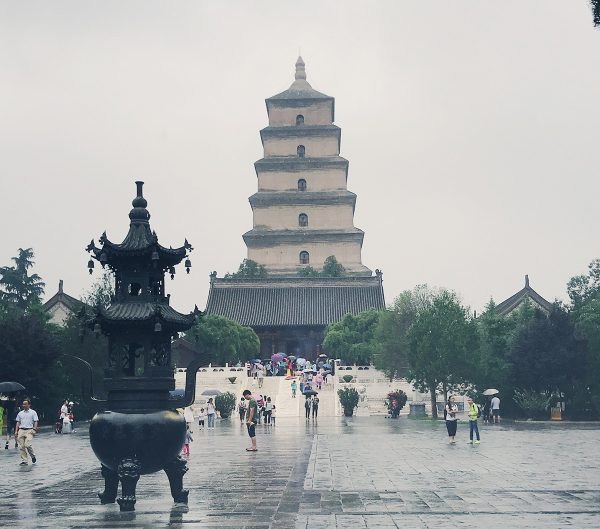 The Giant Wild Goose Pagoda, or Dayan Pagoda, is a true monument to Buddhist culture and architecture. It currently stands at a massive 64 metres (210 ft.) and is seven storeys high. It is square in shape, in-keeping with the Tang-style of architecture. In 2014, due to its impressive stature and rich history, it was made a UNESCO World Heritage Site. It is a place where modern-day Buddhists still practice their faith today. Yet it has not always been this tall, nor has it always been quite this impressive. Its history stretches all the way back to the Tang Dynasty, over 1,000 years ago, and details the fascinating story of how, thanks to the diligent efforts of the monk Xuanzhang, Buddhism became a prominent feature in Chinese culture. But why is it so important to Buddhists? And why is it called the Giant Wild Goose Pagoda?

The pagoda is situated in the centre of Da Ci’en Temple in the famous city of Xi’an[1]. Thanks to the rich tapestry of Tang Dynasty history, Xi’an is steeped in statues, artefacts and ancient buildings just like the Great Wild Goose Pagoda. The history of the pagoda began during the Tang Dynasty, when the famous monk, translator and traveller Xuanzhang[2] entreated Emperor Gaozong to allow him to build a Buddhist pagoda in Da Ci’en Temple. As Xuanzhang was the current abbot of the temple and as he was a well-respected scholar throughout the country, Emperor Gaozong conceded to his request and Xuanzhang was able to personally supervise the building of the Great Wild Goose Pagoda. The original building was completed in 652 A.D. and was made of rammed earth with an exterior stone façade. It was originally only 54 metres (177 ft.) tall and only five storeys high. Its main function was to house the sutras and figurines of Buddha brought to China from India by Xuanzhang. Xuanzhang spent a phenomenal 17 years and travelled through 100 countries to gather these relics, including 657 kinds of sutras[3]. He then enlisted 50 other monks and scholars to help him translate 1,335 volumes of sutras from Sanskrit into Chinese. This endeavour on Xuanzhang’s part heralded a whole new era in the history of translation.

However, being made mostly of earth, the pagoda was not particularly stable. It had to be rebuilt in 704 A.D. by Empress Wu Zetian, who added five storeys to the structure, and was again damaged in 1556 by a large earthquake, which destroyed three of its storeys. During the Ming Dynasty it was once again repaired and renovated, and has remained virtually unchanged to this day.

The name “the Great Wild Goose Pagoda” supposedly comes from a famous folk story about Buddhist history. Originally it was believed that there were two factions of Buddhism: one which permitted the eating of meat and one which did not. One day members of the branch that ate meat couldn’t find any meat to buy or eat. A flock of plump geese flew temptingly past them but they were much too high to reach. One of the monks prayed that the merciful Buddha provide them with meat that day and at that exact moment, as if by magic, the leading goose broke both its wings and fell from the sky. The monks believed that this was a warning from Buddha, prompting them to be more pious and less fixated on worldly pleasures, and so they renounced the eating of meat altogether. The Great Wild Goose Pagoda is supposedly built on the spot where the famed goose fell. 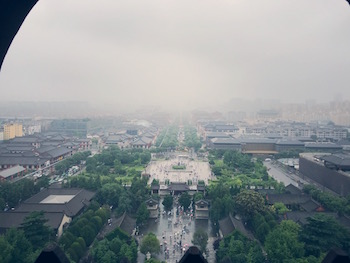 Nowadays the Great Wild Goose Pagoda is one of the most popular and flourishing tourist attractions in Xi’an. A climb to the top of the pagoda rewards you with a stunning view of Xi’an city and directly in front of the Pagoda, in the North Square of Da Ci’en Temple, you’ll find the largest musical water fountain in Asia. The water fountain covers a monumental 15,000 square metres and is divided into three parts: the Hundred-meter Waterfall Pool, the Eight-level Plunge Pool and the Prelude Music Pool. This musical light display seamlessly combines water features, like the 60 metre (197 ft.) wide, 20 metre (66ft.) high “Fire Fountain”, with beautiful music from the symphony “the Water Phantom of Tang”. There are regular performances every day but the show closes down from November through to January of every year.

With its walls that are finely engraved with statues of Buddha by the famous artist Yan Liben, with its many inscriptions written by noted Chinese calligraphers, and with its unrivalled water fountain display, the Great Wild Goose Pagoda is a star attraction in Xi’an city that you can’t afford to miss. It is not only a monument to the Tang Dynasty; it is a symbol of the immortality of Chinese culture.

[2] Xuanzhang (602 – 664 A.D.): Xuanzhang was a Chinese Buddhist monk and scholar, who mainly studied and focused his efforts upon the interaction between China and India during the Tang Dynasty.

[3] Sutra: One of the sermons of the historical Buddha

Join our travel to visit the Giant Wild Goose Pagoda: Explore the Silk Road in China and Explore Chinese Culture through the Ages