Much like the region’s cuisine, the local snacks in Xinjiang have a certain undeniable Central Asian flair that sets them apart from other delicacies in China. Since many of its cities were once powerful oasis towns along the Silk Road, the region has played host to a plethora of different ethnic groups and borrowed all of the finest features from their cooking styles. Thanks to bustling livestock markets and vibrant bazaars, the trading culture in Xinjiang’s cities is still palpable today and provides a unique insight into what the Silk Road may have been like. Vendors hawk anything from olives and freshly baked-bread to honey and some of the sweetest raisins you’ll ever taste. With the thick aroma of crushed spices and freshly roasted mutton wafting through the air, these markets are a veritable paradise for the senses. 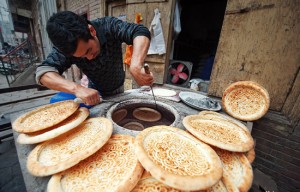 Alternatively known as nan or nang, this delicious type of flatbread is popular throughout Central Asia and really attests to the region’s ethnic diversity. In Xinjiang, the Uyghur ethnic minority have become particularly dextrous at developing and cooking their own unique varieties of naan bread. The dough is first flattened by hand, curled at the edges, and then stamped with a spiked tool, which creates a laced pattern of holes and helps the bread to cook evenly. It is then sprinkled with a mixture of black onion seeds, sesame seeds, and chopped garlic to give the naan its characteristic flavour.

They are traditionally baked in a special clay oven known as a tandoor and watching them being cooked is a spectacle in of itself, as vendors reach deep into the fiery pit and literally slap the dough onto the walls of the oven! After just a few minutes of baking, the flatbread has turned a rich golden brown and is ready to eat. The size, shape, and seasoning of the naan may differ between cities and even vendors, but the result is always a soft, warm flatbread that tastes great as an accompaniment to a meal or simply as a hearty snack on the go. 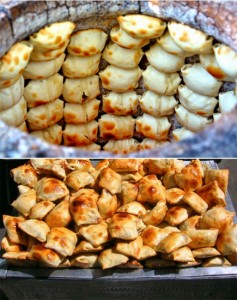 These little parcels of spicy goodness are known throughout most of Central Asia as samosas, but are called samsas in Uzbekistan, Kazakhstan, Kyrgyzstan, and Xinjiang. Unlike other styles of samosa, Xinjiang samsas are traditionally baked rather than fried, giving them a much fluffier texture. The dough used can be simple bread dough or layered pastry dough, which is then stuffed full of delicious filling.

Minced lamb and onions is the most popular combination, although variations include chicken, minced beef, cheese, potato, and pumpkin. The filling, as well as the general shape of the samsa, differs from vendor to vendor, so you’ll be spoilt for choice! They are traditionally cooked in a tandoor oven and are sold on the streets as a scrumptious snack. If you can’t get enough of these tasty little parcels, there are also larger versions available known as kumach, which are considered a meal in of themselves. Just try not to eat too many, or you’ll end up as round as the samsas! 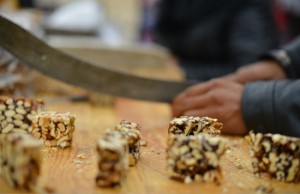 Matang is another speciality of the Uyghur ethnic minority and comes in many incarnations, each one more delightful than the last! This sugary snack is said to have originated from the town of Hotan in southwest Xinjiang, which is famous for its thinly shelled walnuts. The traditional cooking process has been passed down in this region from generation to generation and utilises only the finest locally grown grapes. These grapes are boiled down into a sugary syrup, which is then mixed with crushed walnuts and left to boil for even longer. Once the mixture has achieved the right density, it is pressed into a mould, left to set, and then elaborately decorated with candied fruit. The result is a devilishly sweet and sticky treat that you’ll be happy to get stuck in your teeth!

Nowadays other varieties of matang use different types of nuts, including almonds and cashews, and honey instead of grape syrup. They range in flavour and texture from ones that are as soft and creamy as nougat to ones with a real toffee-like crunchiness. After you’ve asked the vendor how much you’d like, he’ll deftly cut off a sizeable chunk using his knife, chop it into bite-sized pieces, and weigh it on his scales before handing it over. Once you’ve had your first taste of this chewy treat, we’re sure you’ll go nuts for it! 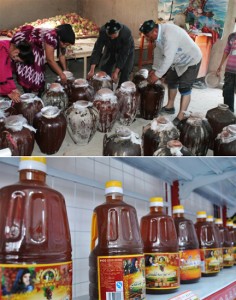 Since grapes are abundant in Xinjiang, it goes without saying that wine is too! In fact, wine production has been an important part of the local economy in the city of Turpan since the Tang Dynasty (618-907 AD) and was celebrated by ancient Chinese poets as “Western nectar”. This type of wine, known as museles, was masterminded by the Uyghur ethnic minority and, although their Muslim faith prohibits them from drinking alcohol, they view this beverage more as a kind of medicine. With its pungent aroma and sweetly sour flavour, it’s sure to cure what ails you! Although nowadays many contemporary winemakers in China follow French methods of production, the Uyghur people have held on to their traditional wine-making process for centuries. In many villages throughout Xinjiang, the brewing of museles is a communal activity and usually marks the end of the grape harvest.

Locally grown grapes are first crushed by hand and strained using Uyghur atlas silk. The juice is then combined with an equal amount of water and a heaping helping of sugar, and is left to boil until it has halved in volume. Thereafter it is stored in ceramic urns and combined with a dizzying number of extra ingredients. These folk recipes vary between localities and can typically include goji berries, mulberries, sea buckthorn, saffron, cloves, and even raw, plucked pheasants, pigeon’s blood, and lamb meat! These animal parts are said to enhance the flavour and endow the wine with many of its medicinal qualities. So forget about hair of the dog; it’s time for wine of the pigeon! The wine is left to brew for about two months before being filtered, bottled, and stored. The result is a deep red grape-wine with a powerful musty aroma and a spiced taste, much like vermouth.

Taste some Xinjiang Local Snacks on our travel: Explore the Silk Road in China